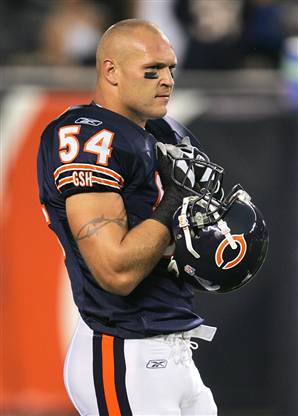 General Manager Jerry Angelo continues his series of interviews with Larry Mayer on the Bears official site, and has some good things to say about Brian Urlacher.  While a lot of folks seems to think that Urlacher is washed up, getting old, or on a downhill spiral, Angelo seems confident that Urlacher can regain his 2007 form.

Brian spent the whole offseason here, and that’s a big thing for me personally to have him train with us because when he played his best football for us he was here in the offseason. The last two years he wasn’t here for varying reasons. That’s part of it, not all of it. But he did look good in OTAs in terms of his movement. There are some things that I’m sure he’s going to be more focused on to do better than what he had done maybe last year. But I feel that he can get back to a Pro Bowl level. He expects that of himself and we expect that of him as well.

What are the chances that Urlacher can be 100% healthy for the entire season?  I certainly don't know, but I do know that we will need him headed down the stretch if we are going to make a push for the North title.