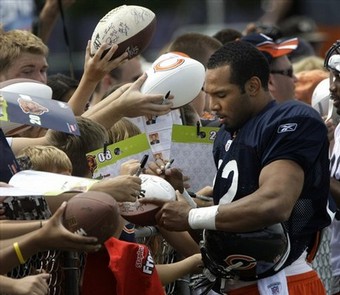 Even with the addition of Jay Cutler, the Bears will need to run the ball, and second year pro Matt Forte will need to show his rookie year was just a tease to what his full potential can be.  NFL people say a players biggest jump in level of play comes between their rookie and second year, so expectations will be high.  Forte had an exceptional first year in Chicago, 1,238 rushing yards, 316 attempts, 63 receptions, 12 total TD, third in the NFL in yards from scrimmage(1,715) and touches (379), and only 1 fumble.  However, the stat that stands out to me is his average yards per carry, 3.9.  It's OK, but not what a top tier running back should be producing.

Last year thirty backs averaged better than the 3.9 of Forte.  Improvements to the Bears offensive line will go a long way towards improving his average as will not dealing with an eighth defender in the box on almost every running down (thank you Jay Cutler!).  A healthy Kevin Jones will help keep the running game fresh.  If Jones is 100% the drop off won't be as great and both backs bring a different style for the defense to think about.

If Forte is able to really get going running, it'll let the Bears hit some big gains off of play action.  The middle of the field is usually what opens up first off of play action and with Greg Olsen primed for a break out year it could be a beautiful thing.  The pieces of the Bears offense should really compliment each other in 2009.

Even though Cutler is used to playing in poor weather, some late season games will come down to grinding it out and winning the time of possession; can you keep the chains moving and hold onto the ball?  I'm sure we'll hear the "get off the bus running" sound bite about a hundred times this year, but I expect Forte and the offensive line to be up for the challenge.  As I've written before I could see Forte getting less carries but more yards.  I don't see him approaching his 63 receptions, but he'll still get his fair share of catches.  I could see him making the NFC Pro Bowl (then again if the Bears are in the Super Bowl he'll have to skip the game), and establishing himself as one of the top backs in the game today.