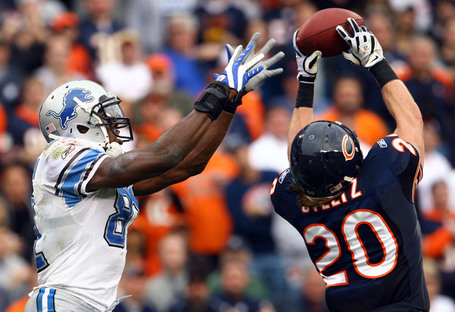 When we talk about the defensive backfield, we typically lump it in with the wide receiving corp as the biggest question marks the Bears have going into 2009.  Considering in 2008, only the Chargers and Seahawks were worse statistically in pass defense, we have a reason to be worried.

Larry Mayer sits down with Coach Jon Hoke to get a feel for where we are right now, compared to 2008, and Hoke doesn't really seem to have a sense of urgency when addressing the issues.  Of course, as we all know, he's not going to come out and say anything critical, but he seems totally comfortable in having things the way they are.

We’re (sic) got enough guys competing for positions that at the end of the day we’ll end up having some depth and some quality starters that will help us win games.

Okay, so maybe Hoke is subscribing to the same mentality that has been tossed around WCG regarding our WR corp:  toss a bunch of them against the wall, and see who sticks.  While we definitely have some decent talent in the backfield, I'm not necessarily a fan of the whole "power in numbers theory" when it comes to finding talent to put on a football field.

It seems the Bears have been playing the football version of musical chairs, playing what seems like sometimes every player at every position at one time or another.  Sure, it's the offseason, so now is the best time as any to start figuring out who our starters are, but is it working?

Sure, an improved pass rush will improve the defensive secondary by default, but it would be nice to see a starting lineup back there that can hold there own regardless of pass rush.  Couple of questions to discuss:

1- Who do you think our 2 starting CBs and 2 Safeties will be? (we know that Manning is a virtual lock at Nickel)

2- Will that group of guys be enough to get out of the basement in pass defense in 2009?