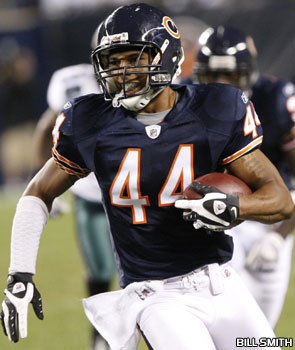 In this ongoing series I'll look at which Bears players I think will need to contribute the most in 2009 for them to have a successful season.

As the most tenured safety on the Bears, Payne will be asked to fill some of the leadership void created with the loss of Mike Brown.  Brown was a popular teammate, a Team Captain, but more importantly he knew the defense inside and out.  He knew where his teammates should be at all times, and the players often looked to Brown during games.  Brown put in so much film work (is it still called film work, or is it DVD work?) that he could often spot the oppositions tendencies. I'm not saying the Bears will start to look at Payne in that same light, but Payne better bring his playbook everywhere he goes this off-season and live at Halas Hall.

As the SS in the Bears D, he'll be asked to be an 8th in the box on many running situations, and he has shown a willingness to stick his head in there and be a big hitter.  He needs to be more fundamentally sound in his tackling and in his play recognition.  The Bears can't afford him to get sucked in on play action or afford him to get lazy in his zone spacing.

It's no coincidence that when Mike Brown was on the field the Bears had a much better record than without him, and in 2009 Kevin Payne will have to start making his own legacy in Chicago.  I know things can change once the season gets started, but remember who's running as the #2 SS; Josh Bullocks.  I don't know about you, but I prefer my Josh Bullocks in small doses and on special teams.

If you haven't weighed in on "Who’ll Start Alongside Tommie Harris?",  then head over and cast your vote!