NightLinks: Bears Responsible With Their Money

Share All sharing options for: NightLinks: Bears Responsible With Their Money 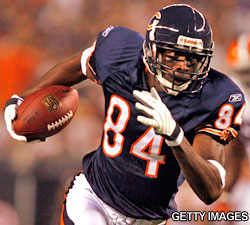 The Chicago Bears have always been known for different things from a financial perspective.  On one hand, we have people who say the Bears are tight with their wallet.  On the other hand, we have seen time and time again that our own players will get rewarded if they produce on the football field.

Tonight's NightLinks both pertain to the current state of the Bears financial situation, both coming from Bradd Biggs at the Sun Times.  The first article talks about "dead space"- money that is tied up in players that are no longer on the roster.

According to the most recent figures, the Bears are carrying $6,535,640 in dead cap space. That might sound like a lot but consider that it is just 4.8 percent of the total pie which is more than $135.9 million. That number will go up. The Bears have 80 players under contract right now and as they work toward a final 53-man roster, players will be released that add money to that but as best as we can tell there aren't any players in jeopardy of losing their job that would add a big number to that figure.

Players with the highest dead space on the roster:

The next article discusses the cap space that the Bears currently have and where the $17+ million could go.

A check on Wednesday afternoon of the most recent figures indicates that the Bears remain $17.67 million under their adjusted salary-cap figure of $135.9 million. That means the organization has committed 86.99 percent of its cap to this point and there is plenty of room left over for spending.

So, where could the money go?  First player listed is an obvious one...

Jay Cutler. We wrote here previously that the Bears will look to do something long term with Cutler, perhaps during the season. They'll need to make that move in October probably in order to take advantage of the cap room and apply money to this season. It makes perfect sense. Yes, Cutler remains under contract for three more seasons. But he has a $12 million roster bonus in 2012 that the team would probably like to avoid

And moving along to other players:

Anthony Adams. The defensive tackle is entering the third year of a modest four-year contract. If Adams emerges from training camp as the starting nose tackle, perhaps he merits a modest extension at some point. He's proven to be valuable every time he's been called on, which makes it a wonder why the coaching staff has gone away from him on occasion.

Mark Anderson. The defensive end is entering the final year of his rookie contract. If a new CBA can be hammered out he will become an unrestricted free agent after the season. Anderson could either be a hot commodity by the end of the season or just another guy who is another season removed from his breakout 2006 rookie year. It might be prudent for the Bears to wait until season's end to fully evaluate him and not pay him by midseason to apply money to the 2009 salary cap.

Adewale Ogunleye. He turns 32 next month which means he'll be 33 when the 2010 season begins. We're not ready to say whether or not the Bears should re-invest in Ogunleye, but if he performs well and is willing to come back at the right price, it would take some of the gamble out of trying to replace him with an unknown. We'll see how rookies Jarron Gilbert and Henry Melton fare this season. Gilbert will be worked as a tackle but might eventually find himself at left end.

Kevin Payne. If Payne had remained at strong safety for the entire season, he just might have led the Bears in tackles. He's expected to be back in that role this season. If he can improve in his second season as a starter, perhaps he's worth looking at in terms of an extension. But, again, that's a decision best made at this time next year, not in the middle of the season.

Brandon Rideau. If the Bears buck the trend at wide receiver and find a hidden talent here, securing him with a modest deal would make a lot of sense. There's a big difference between running with the first team on occasion in OTA's and running with the ones in preseason. Let's see how this pans out.

Yes, Brad Biggs listed Brandon Rideau.  And while this one leaves me scratching my head a bit, it's Bradd Biggs, and I take everything he says as solid gold.