Looking Back: The 1989 Chicago Bears

Share All sharing options for: Looking Back: The 1989 Chicago Bears 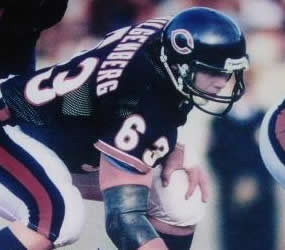 Twenty years ago.  1989.  What were you doing?  Were you even aware of our beloved Bears?  Some of you weren't even born!  There's always a big hoopla made over the 20th anniversary of championship teams; I say why only look at the great teams?  This year marks the 20th Anniversary of the 1989 Chicago Bears.  So I'll give them their due!

Before the season the popular, but injury prone punky QB known as McMahon was traded to the Chargers, leaving Mike Tomczak and Jim Harbaugh to battle it out for his job.  Losing arguably one of the most popular players in Bears history was a tough blow and the Bears needed a strong start to the season to appease the fan base.  Dual number one draft picks Donnell Woolford and Trace Armstrong gave the Bears some hope, and Da Coach, of course, would keep this team winning... wouldn't he?

What ever lingering hope us Bears fans had after the incredible 1985 season in thinking another Super Bowl was right around the corner, came to an abrupt end in 1989 with a 6-10 record.  After winning their division five straight seasons and coming off a NFC Championship loss to the 49ers in 1988, the six win season was a reality check for many.

There were still many familiar faces from Super Bowl XX playing in Chicago, Richard Dent, Mike Singletary, William Perry, Steve McMichael, and Dan Hampton among the defenders, and Jimbo Covert, Mark Bortz, Tom Thayer, Keith Van Horne, and Jay Hilgenberg were still manning the trenches, but there were some new players making their names in Chicago.  Neal Anderson was coming off his first of what would be 4 consecutive Pro Bowls.  Brad Muster was primed to take over the starting fullback job from Matt Suhey.  James "Robocop" Thornton was coming off a solid rookie year, causing Bears fans to thing ‘we've finally found the next great tight end'.  And who can forget Tom Waddle making his Bears debut in the '89 season?  (1 catch for 8 yards and 1 punt return for 2 yards)

Things started out so promising by winning their first 4 games.  The Bears opened up with the defending AFC Champion Bengals coming to town, and saw Dan Hampton sack Boomer Esisaon twice, while Neal Anderson (21 carries for 146 yards) helped the Bears offense overcome a shaky game by Mike Tomczak for a 17-14 win.  Week 2 the Bears intercepted Viking QB Wade Wilson 4 times and rolled up 28 fourth quarter points in winning 38-7.  In week 3 the Bears lit up Detroit 47-27 behind Mike Tomczak's 302 yards and 2 TD, and 4 sacks by the Bears D.  Then in week 4 rematch of 1988's Fog Bowl, the Bears picked off Randal Cunningham 4 times, sacked him 4 times (3 by Dent), and won 27-13.

Then a 3 game losing streak nullified what ever Bears buzz was surrounding the city.  RB Lars Tate (who?) and QB Vinny Testaverde helped the Bucs win a shootout 42-35.  Next up the Houston Oilers scored 14 unanswered fourth quarter points to come back and win 33-28, helped along by Tomczak's 4 ints.  Then in week 7 the Bears traveled to Cleveland and got spanked 27-7, behind an efficient 22 of 29 for 281 yards by Bernie Kosar including a 97 yard TD to Webster Slaughter (8 for 186, TD).  This was also the start of a QB controversy as Mike Ditka yanked Tomczak for Jim Harbaugh.

Week 9 and finally a trip to Green Bay to face the "Magic Man" (gag) Don Majkowski in what would have a very controversial ending.  With less than a minute remaining in the game,  fourth and goal from Chicago's 14 yard line, Majkowski scrambled, crossed the line of scrimmage, then threw a strike to Sterling Sharpe in the end zone.  The referees correctly threw the flag (loss of down penalty, game over!), but some shadow of doubt crept into the Zebra's minds and they asked for an instant replay review.  Play reversed, TD scored, Packers win.  B.S.  B.S.  B.S.

The Bears and Packers were both now 5-4 just 1 game behind the 6-3 Vikings, and the NFC Central was still there for the taking.

Week 10 in Pittsburgh was easier than expected with a 20-0 win.  The Bears defense held the Steelers to 216 total yards and picked up 6 turnovers and 4 sacks.  With 6 games remaining everything was looking up for the Bears and their fans.  Tampa Bay was coming to Chicago and the Bears were looking for payback.  However, 4 turnovers later, and a late Donald Igwebuike field goal, and the Bears lose 31-32.  The Bears let a McMahon like comeback by Mike Tomczak go for naught.  He replaced Jim Harbaugh and threw three fourth quarter TD's on 6 of 7 passing for 156 yards.

Chicago's hopes died a slow and painful death, as they continued their losing ways by dropping the rest of the games on their schedule.  They fell to .500 at the hands of the Redskins losing 38-14 and getting out gained 492 to 191.  Then in week 13 the Vikings turned the tables and won 27-16 as Wade Wilson threw 2 TD's and had 260 yards passing.  In week 14 the Bears faced a hot Lions team that would win 27-17, sacking Bears QB's 5 times and getting 2 TD and 120 yards rushing by rookie Barry Sanders.  The hated Packers traveled to Chicago for the next to last game with the Bears still fuming over that B.S. call in week 9, they were ticked off and looking for retribution...  but it wasn't their day as the Packers ran up over 450 yards and cruised to a 40-28 win.

The season finale and the defending champ 49ers were waiting for a final tune-up before their playoff run.  I wonder why the Bears even showed up, dropping the contest 26-0.  The Bears D tried to keep them in the game, getting 3 sacks and picking of Joe Montana, but the Chicago O couldn't get anything clicking.  The 49ers would go on to defeat the Broncos 55-10 in the Super Bowl behind league and SB MVP Joe Montana.

The Bears were represented in the Pro Bowl in 1989 by running back Neal Anderson (274 rushes for 1,275 yards, 11 TD, & 50 receptions for 434 yards and 4 TD), center Jay Hilgenberg (when will Jay get some Hall Of Fame love for his 7 straight Pro Bowls?), and middle linebacker Mike Singletary (1 sack, countless tackles, and numerous bulging eyes).

What were some other notable 1989 moments?

Batman was being played by Beetlejuice.

Kevin Costner made us believe there was more in Iowa than just corn.

The Pistons swept the Lakers (Booo!!!).

‘Don't Worry Be Happy' was making America smile and forget their troubles.

Spike Lee wanted us to Do The Right Thing

1989 the number, another summer (get down)
Sound of the funky drummer