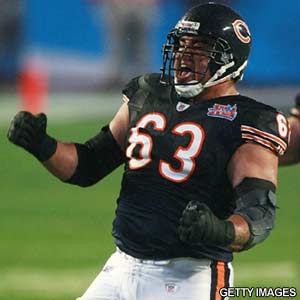 Numbers and stats do not always tell the truth when looking at talent.  We can argue until our faces are blue about QBs, and compare stats to what we think is true talent.  But tonight's NightLink is an interesting one... it appears that the "number crunching" done by KC Joyner on offensive lineman puts Roberto Garza as one of the elite Right Guards in the NFL.

"It is not based on the location of the block but rather specifically tracks which blockers were actually at the point of attack. A POA block is considered to be successful (i.e. a POA win) if the blocker created a lane through which the runner could go.

"If the blocker is beaten at the POA, I segment those losses into five categories: Gap stuff (blocker gets stopped at POA); Defeated block (defender gets past blocker at POA); Pushed into backfield/POA (blocker gets moved into backfield/POA and negatively impacts runner's progress); Penetration (defender gets past blocker and makes contact with ballcarrier in backfield); Stringout (defender strings run to outside out). The last formula takes into account run penalties. An offensive penalty (i.e. holding, illegal use of hands, etc.) counts as a POA loss and a defensive penalty as a POA win."

Make sure you head over and read Brad Biggs' entire article.

Is Garza truly one of the "elite" Right Guards in the game?