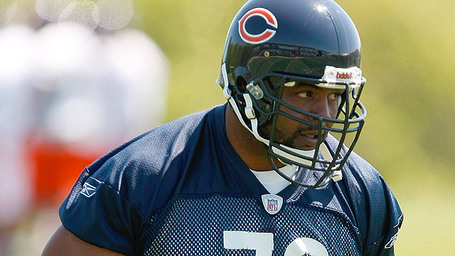 I know, I know, why not Chris Williams?  He's more of an unknown after all?  If Williams were at the left tackle position, and had the job of protecting Jay Cutler's blind side, he may have received a place on this list.  But, as it stands right now, Orlando Pace has that job.  There's a reason left tackles (on average) are the highest paid members of the offensive line, and there's a reason left tackles are drafted before their line mates.  Any successful passing game needs a rock at left tackle.

Another factor in my placing Pace at #4 is if he goes down or ends up not being the future Hall Of Fame Orlando Pace we all expect him to be, it will cause an O-Line chain reaction.  If Pace goes down Chris Williams will be shifted over to the left side, which then will cause Kevin Shaffer to line up at RT, that is unless the Bears coaches feel moving Frank Omiyale from LG to RT and putting Josh Beekman in at LG would be the best combination for the line.  While I do have confidence in all these guys, it's the continuity of them playing together that worries me.

The Best offensive lines are the ones that can play together for a while.  The more stability you have with the guys up front the more they seem to know what he other guy will do in any situation.  If Pace can stay healthy (he only missed 2 games last year and claims to feel better than he has in the last several years) the Bears O-Line could do some very special things.