Share All sharing options for: Interview With Brad Biggs- Part 3 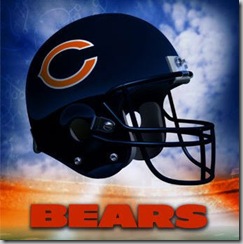 Thanks to everyone for jumping in and putting some questions together for Brad Biggs, the (in my opinion) best Chicago Bears beat writer out there.  He has direct contact with the team, and is able to provide invaluable insight for those of us who only see things from the outside.  Make sure you keep up with his blog, Inside the Bears, at http://blogs.suntimes.com/bears/, and follow his Twitter (BradBiggs).  He'll be providing updates around the clock during Training Camp.  On to this round of questions...

GeauxBears:  Talks are still continuing about our defensive secondary... our passing D was unremarkable last year, and we can't see that happen again if we are going to be serious about competing in the NFC.  Certainly, an improved pass rush will take some pressure off of the DBs, but do you think we have enough talent on the roster to have a solid stand-alone defensive backfield?  What's up at the 2 Safety positions?

Brad:  The nice thing is that new defensive line coach Rod Marinelli will not need to use his flux capacitor to go too far back in time. The Bears just need to recreate the kind of consistent pass rush they got in 2005 and 2006 in order for the secondary to look, well, like it did in 2005 and 2006. The personnel in place is pretty much the same and if Marcus Harrison can take a step here in his second season, he could be every bit as useful as Tank Johnson was on the field and much less of a menace off the field. It starts with Tommie Harris in the middle and Marinelli should do a lot of good for him for reasons I outlined here last time. He's a no-nonsense guy who players love to play for. Marinelli has a way of connecting with each guy in his meeting room, players from all different backgrounds, and getting them to perform. If he can get Harris going, and if Harris' balky left knee allows him to get going, the rest of the unit should fall into place. Adewale Ogunleye is going to be playing for another bite at the applea good contract and a big season from him will not be a surprise. Mark Anderson could go from guest starring in the Bears' own version of "Lost" to also putting himself in position for a lucrative contract. Even though he's been a shadow of himself as a rookie, Anderson could put himself back on the map with a productive campaign. Alex Brown should be his steady self. It's not a lock the Bears are going to solve their defensive woes with a rebirth on the line, but if it's going to happen Marinelli is probably the guy to make it happen.

We all know that Coach Smith is a teacher and not a loud, drill sergeant type coach.  But does he ever get fired up and get in players faces during practice?

Smith commands the respect of the players and he always has. You don't have to have Mike Ditka out there or someone like Bill Cowher, who could be a screamer on the sideline, to get through to the players. Smith will talk to players face-to-face on the practice field, but I've never seen him getting in a player's face.

Back in January, Warren Sapp made mention that he was going to take interest in helping Tommie Harris become a better DT.  Have you heard anything about that since then?

Sapp told Mully & Hanley on the Score that he was going to get together with Harris. I have not heard anything about that since. It's more important for Harris to get together with Marinelli, who is the coach that Sapp credits for him becoming a Hall of Fame-worthy talent. Harris doing drills with Sapp in March or April isn't going to have a lot of impact in September, is it?

The NFC North is potentially a 3-way battle (sorry Lions fans... maybe in a couple of more years)... will the Packers be able to make a push for the North title in the first year of the new 3-4 defensive scheme?

Everywhere Dom Capers has been, he's had a knack for getting that system up and running immediately. There hasn't been an adjustment period, Capers' 3-4 defenses have been very good and they've been very good in a hurry. Even if Green Bay is aging in the secondary, the Packers still have some solid players back there and the Bears' wide receivers would probably be the first to tell you that. Capers had a dramatic impact on defenses he ran in Jacksonville and Miami in his first season with those clubs, and with expansion teams in Carolina and Houston, he was solid immediately. Carolina was seventh in total defense in 1995, its first year. The issue is going to be how the personnel will fit on the line and at linebacker where some are concerned about Aaron Kampman's ability to adjust. If Capers can enjoy somewhat instant success once again, sure, the Packers will be in the race.

Michael Gaines:  how much will we see from him, and what are the chances he comes in at FB in short yardage situation?

Gaines needs to win a spot on the 53-man roster in training camp before you start worrying about how much he will be involved and in exactly what role. His primary competition for a job will be Kellen Davis and Jason Davis, the unrelated tight end and fullback. Gaines projects as primarily a blocking tight end, but he has the ability to make some plays downfield and I saw him make a couple dandy catches during the offseason program. When Smith was pitching Gaines about signing with the Bears after he had made a free-agent visit to the New York Jets, he mentioned the possibility of lining him up in the backfield. Certainly that is a possibility. The Bears did that some with Greg Olsen last season but not on short yardage situations. My instinct would tell me that you would want your No. 1 fullback in the backfield in a short-yardage situation.

That wraps up this session with Brad.  Windy City Gridiron is incredibly thankful for the insight he is providing us, and is looking forward to Training Camp!  Thanks Brad!