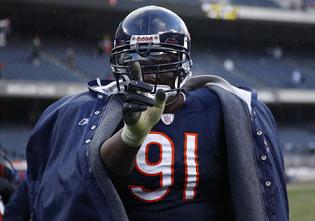 I'll admit it right now, the top 3 were tough to rank.  I went back and forth a few times, even making changes after I started this series.  I'm confident in my top 3, and I'm sure they'll be plenty of Bears fans that disagree with me, so...

When Tommie Harris is healthy he's the best 3 technique tackle in the game today. There is no argument.  His combination of speed and strength makes him a perfect fit for what the Bears do defensively.  The problem the last few seasons has been his health.  After playing in all 16 games his first two years, and having a great start to the 2006 season, he sprained his knee and ruptured his hamstring in week 13, ending his season and causing him to undergo surgery.  In '07 he was eased back in the lineup, starting 13 games, but playing in all 16.  Last year even though he was bothered by knee and hamstring issues most of the season, he still started 13 of the 14 games he played in.  In his 5 seasons as a Bear he's only missed 6 games.  The problem is the amount of games he's played in where he's less than 100%.

Is Tommie Harris at 50%-75% better than most DT's in the game today?  I don't know, and I hope we won't have to find out.  Even though Harris skipped some of the OTA's and Mini-Camp practices, for precautionary reasons, all the coaches are saying he's fine, and Jerry Angelo says "there's nothing to be alarmed about" ... not really a ringing endorsement on his health, but there's no reason he shouldn't be healthy this year.

If #8 on my list, Rod Marinelli, is the guru we all hope he is, then Harris should have a huge year.  On that same thought process, if Harris can't put it all together health wise, Marinelli's new pupils should be ready to pick up the slack.  This is the biggest reason I put Harris at #3 and not higher.  I think the depth behind him is better than behind my #1 and #2.

With the way the Bears rotate their D-Line, if Harris can get about half the snaps as the 3 Technique tackle, I think everyone will be happy.  He'll stay fresher, have less chance to tweak something, and be more of a disruptive force when need be.