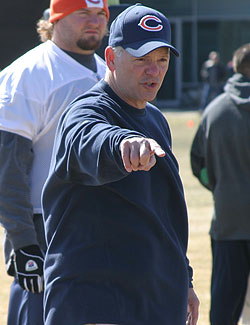 There are plenty of people who point to the 0-16 record of the 2008 Detroit Lions when Rod Marinelli's coaching credentials are brought up.  And others who say that Bears fans are expecting too much from Marinelli, stating that he is no "savior" for our defensive woes.

Personally, I am as excited about the acquisition of Marinelli as I am of Jay Cutler.  I don't put either one of them into a "miracle-worker" category, but I certainly do have a strong belief that they are both a solid part of the foundation that is being built right now at Soldier Field... a foundation that is likely to reap benefits for many years to come.

Marinelli's thoughts on his 2008 season in Detroit:

Tremendous opportunity for me. Tremendous people in Detroit. I always put it on myself. I did not do the job.

And if you remember press conference after press conference last season, after each week another loss, Marinelli would stand in front of the podium and essentially say the same thing.  He has always handled it that way, but is now undoubtedly as happy as he could be in Chicago.

This is a special place for me, a quality organization, and it's special because of Lovie (Smith). It's one of the real driving forces behind this. We had the chance to work together so much before. We were part of the beginning of change in Tampa Bay in 1996. We share a strong belief in the system. It's in place. There are good players. I hope I can inspire, provide a base of knowledge and improve each man's game.

That always seems to be a common denominator when talking about Coach Marinelli- he's got a ton of knowledge, and is a great teacher.  Former NFL head coach Herman Edwards seems to think the same thing.

"I think this is one of those coaching moves of this entire season that is going to bring big dividends," Edwards said. "Rod is one of the best, if not the best, defensive line coaches in the league. I look for Rod to help that entire defense overachieve."

Our offense is looking better than it has in a long time, but it is the Chicago Bears defense that has always set the tone of a game.  Last year, we had several defensive issues, with the biggest one being the lack of pass rush.  I don't know about you, but I am thinking our pass rush is going to improve vastly in 2009.  Defense wins championships... and it all starts in the trenches.  Cliche?  Sure.  But true nonetheless.

In wiltfogjr's post today, Tommie Harris was listed at the #3 most important Bear heading into the 2009 season.  One thing we continue to question is Harris' health.  Is he healthy?  Marinelli hints that he is.

"Tommie is strong, motivated, bright, perfect for the system," Marinelli said. "He was banged up last year. He seems pretty healthy. He's done it. This group is going to compete. It is exciting to see them come together."

Read into that however you will, but I'm on board.  I'm fired up about this 2009 season more than I have been in years.  I'm buying into it.  I believe in Lovie Smith, and I believe in Rod Marinelli.  Our offense is ready to go, and our defense is going to step back up and play to the fullest potential.  Let's do this!