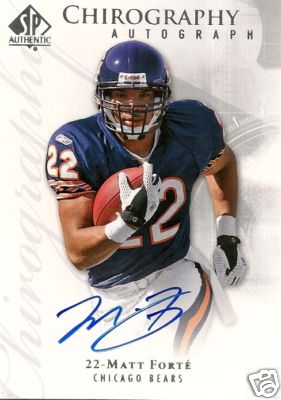 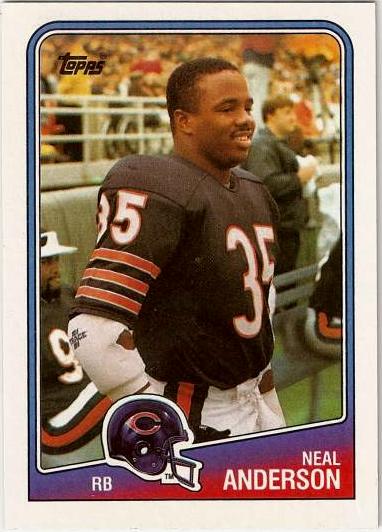 Many Bears fans have found comparable traits between Matt Forte and former Bear and four time Pro Bowler Neal Anderson. While I do see some similarities in their games, I think Forte has the potential to be a more productive back.

Anderson was drafted as the heir apparent to Walter Payton, but he was drafted while Walter was still one of the best backs in the game, so there wasn't much pressure on him to produce right away. Anderson was drafted in the 1st round, 27th overall in 1986, a year after the Bears were riding high off the SBXX win. Payton would go on to make his 9th Pro Bowl in 1986, as Anderson rarely got the ball. The 14-2 Bears only gave Anderson 35 carries in which he rushed for 146 yards. He also grabbed 4 receptions for 80 yards and a TD. Comparing that rookie year with Forte's and there really is no comparison. There's really no way of knowing what kind of production Anderson would have had if he were thrust into the starters role as a rookie, but one could imagine he'd have found success. Every opportunity he received he made the most of.

Anderson was a 5'11" 210 pound back that ran a bit more compact through the hole than the upright running style of the 6'1" 221 Forte. Even with the slighter build Anderson was an accomplished blocker, and blocking is what kept Forte on the field so much as a rookie. In that aspect they compare favorably. In today's NFL picking up the blitz is usually the reason young running backs aren't 3 down players. Matt Forte is very accomplished in this. Neal Anderson was also a 3 down back, not only because of his great hands, but his ability to pick up the blitz. In fact during the 1987 season (the 15 game scab season), in order to get Anderson more involved in the offense, he started at fullback along side Walter Payton. Anderson 's totals of 129 attempts for 586 yards (4.5 per carry) and 47 receptions for 467 yards let the Bears know the running game was in good hands when Walter decided to retire following that '87 season.

During his 4 year Pro Bowl run Neal Anderson was called the 'best all around back' in the game by most NFL experts, in that aspect Matt Forte will need to get to work. Anderson never played with a Pro Bowl QB like Forte will in 2009. The impact Jay Cutler will have on the running game can't be said enough.

In 1990 Anderson held out briefly for a raise, which caused some fans to look at him in a negative light. He did receive his bump in pay, a well deserved bump by the way, but some fans started to turn on him. Hamstring troubles started to plague him his last few years, causing even more fans to want him replaced. Anderson was the Bears leading rusher every year from 1987 til 1993. He retired after his contract expired that year and didn't bother looking for a new team to play for. As a fan of his I'm glad his positive impact he had on the franchise far outweighs the negative stuff he dealt with as his career was winding down.

If Matt Forte can stay healthy, and isn't overworked into an early retirement, he has the potential to overtake Anderson for #2 on the Bears career rushing list, but only time will tell. He has the correct demeanor and skill set to be a Pro Bowl performer in the very near future, and I'm sure Bears fans would be satisified if he can have the type of production that Neal Anderson had during his heyday.

Here are the career numbers for Neal Anderson: