Brad Biggs' Players Worth Keeping An Eye On

Share All sharing options for: Brad Biggs' Players Worth Keeping An Eye On 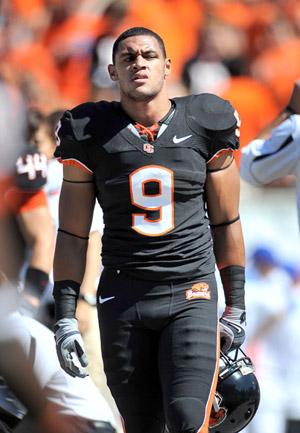 It would be easy to start rattling off names that we would want to watch during training camp- Cutler, Harris, Hester, Urlacher.  To strip down a roster from 80 players to 53 would be no fun task, but it does make you start thinking about some of the players who might not get as much media attention.

Brad Biggs has put together a list of "under the radar" guys to keep an eye on during camp.  A couple of the players are ones that we have been wondering about here at WCG.

Safety Al Afalava. The Bears went into the draft knowing they needed a free safety but with their draft position, they didn't identify any that would fill their need in what was considered a weak class. They wound up grabbing Afalava in the sixth round, and he's a strong safety although the Bears have said he can play both positions. He's a serious hitter and should provide some exciting moments late in some preseason games that are otherwise not exciting. It could be an uphill battle to make the roster and just being a thumper won't get it done for him. He needs to show instincts first. Missing the bulk of the offseason program because of the rules for schools like Oregon State that are on the quarter system didn't help him.

Running back Garrett Wolfe. It looks like veteran Adrian Peterson will be pushed for a roster spot but after seven seasons he isn't going to go without a fight. Peterson has been a security blanket for coaches. They know he can handle any situation at any time, and you can't put a value on what that means. Wolfe was better on special teams last season but has yet to find a niche on offense. He's going to need to step forward and a real case can be made that his opportunity has not come yet.

Different people have different opinions of Afalava, and I really wonder if he'll have a shot at the final 53.  My gut says he'll need a huge camp to find a spot.

Wolfe has been mentioned by Ron Turner and Jerry Angelo this offseason, and both of them made comments about wanting him to get worked into the game here and there.  But if he isn't living up to his potential, with a healthy Kevin Jones and the always reliable Adrian Peterson, Wolfe might find himself as the odd man out.