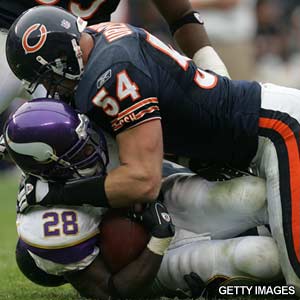 Quick.  Who is the back up middle linebacker for the Chicago Bears?

Yahoo sports has no one listed backing up Urlacher.  Either does The Sporting News, ESPN, or Fox Sports.  CBS Sports has Mike Rivera listed as the #2 MLB.  Mike Rivera?  How about we let the undrafted rookie free agent make the team before we anoint him second string MLB?  What about RotoWorld?  Well, at least they have Hunter Hillenmeyer listed #2 on the depth chart, as does Brad Biggs of the Sun-Times.  Then again, wouldn't you consider Hunter on the bubble to make the team this training camp?  Biggs does; in the very same piece referenced a second ago.

OK, I'm sure by now my point is hammered home.  The Bears without Brian Urlacher is like an Italian Beef with no Giardeniera.  The potential is there to be real good, but something is just missing.  In his 9 year career Urlacher has missed only 7 games, all in 2004, and the Bears lost all 7 of them.

When Lovie Smith accepted the Head Coaching position with the Bears before the 2004 season, I'll bet he was salivating with the thought of a 6'5" middle linebacker sprinting down the middle of the field in his version of the Tampa 2 defense he brought with him.  No other MLB in the league has the size/speed combination and ball skills of Brian Urlacher.  Without Urlacher the Bears defense simply can't do some of the things they'd like to do.

The Bears D is set up for the weakside linebacker to make plays, so I'm sure Lance Briggs will get his 100+ tackles again, but it's the unique play of Urlacher that they'll need to be a top 5 defense again.  All early reports are that he's healthier than he's been and he's in great shape.  A Pro Bowl return for Urlacher is a definite possibility.