NightLink: What’s Up With The Rest Of The NFC North?

Share All sharing options for: NightLink: What’s Up With The Rest Of The NFC North? 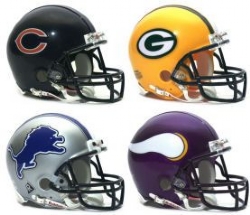 The Packers have a number of players they're counting on to have a bounce back season in 2009, a few coming off injuries.  Here's a look at six possible thorns in the Bears sides.

NFL.com had a look at Packer QB Aaron Rodgers from Brian Baldinger and Jamie Dukes.  Maybe that Jamie Dukes does know a little something about football...  nah...

The Packers might have a new weapon on the offense.  Their rookie FB is turning heads.  Hopefully Brian Urlacher will put in extra work on shedding the lead blocker.

Yahoo Sports has a fun piece about how Head Coach Brad Childress has to deal with the situation with his QB's.  Good luck Brad!

Now that the flirtation with Brett Favre has ended (for now) I wonder how long til some Michael Vick rumors circulate.  Oh, that long.

At least the Vikings aren't on the Anti-Vick List yet.  So there's still a chance!  Personally I hope the Vick stuff hangs over the Vikings like a stale smelly fog.  Any more reason to alienate current Viking QB's Sage Rosenfels and Tarvaris Jackson is OK with me.

If you have any Detroit Lion cornerns then hit the jump...

Anyone think the Lions have a shot at anything this year?  The Detroit Free Press has their projected starters listed here.  Some highlights; Daunte Culpepper at QB over rookie #1 pick Matthew Stafford.  As a Bears fan, I'd rather see the rookie thrown to the wolves... er, um, Bears for their week 4 trip to Soldier Field.  The veteran Culpepper will give them a better chance at a few upsets.  Rookie TE Brandon Pettigrew and rookie FS Louis Delmas look to be starting day 1 as well.