Share All sharing options for: NightLink: How Much of 2008's Concerns Roll Over To 2009? 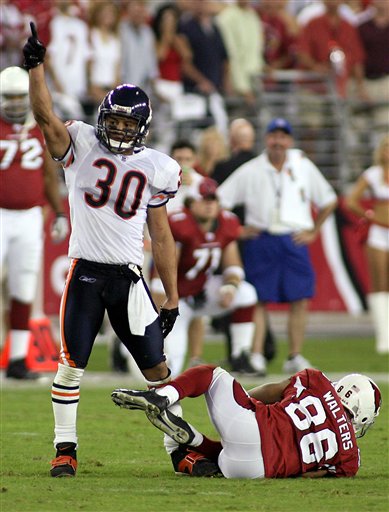 First and foremost, a very happy holiday weekend to all of you.  Hopefully, you will all be able to pack in as much fun as possible, and remain safe at the same time.

Looking back to this time last year (the time just before training camp), there were 10 things that were the most pressing for the Bears, according to the Chicago Sun-Times.  Today, they have reviewed the list, and have included their synopsis of whether the Bears effectively addressed all of the top 10 in 2008.

Before you click on the link to see the synopsis, review the top 10 things that the Bears should have addressed last season, and see how many of them will be on this year's list again.

1. QB derby. Amid swirling rumors that the Bears may have interest in Chris Simms as a No. 3 quarterback, we still don't know who the No. 1 will be. Leave it to the Bears to do this.

2. Defense first. The Bears plummeted to 28th in team defense last season (2007) and it's yet to be determined if it was an injury-induced aberration, or a signal that Bob Babich could be on the hot seat.

3. Face of the franchise. This could all of a sudden become the No. 1 storyline if Brian Urlacher's ongoing contract squabble blows up. Even if he isn't in camp--and who knows what the chances are for this--he'll be game ready come the regular season because he's a workout warrior. Some have been concerned about a decline in play because he didn't make the Pro Bowl, but at the end of last season Urlacher was playing as well as any defensive player in the league.

4. Line dance. None of the other rebuilding phases on offense will be particularly successful if the overhauled line doesn't mesh. Rookie Chris Williams will be the key and his development in the coming weeks at left tackle is critical.

5. Born to run. There certainly won't be a distraction this summer with Cedric Benson having to answer a myriad of questions unrelated to his failed efforts to live up to his status as the fourth pick in the '05 draft. Matt Forte certainly won't be under pressure to exceed Benson's production. It's about replacing Thomas Jones, remember him? Forte is a gifted runner who the Bears believe is a first-round talent

6. Hesterized. The company line is the Bears are never going to prevent Devin Hester from excelling at what he does best--return kicks. But there's an issue of how much he will be used as a wide receiver and how that will impact his availability for special teams. Hester is on a historic pace as a future Hall of Fame return man and you can understand the desire to get the ball in his hands more

7. Special stuff. While the Bears took a step back on defense, at least temporarily, and have never gotten their act together on offense under Lovie Smith, the one area you have always been able to count on is Dave Toub's special teams unit. There are two concerns now, topped by the dilemma involving Hester. Second, while there are a lot of potential replacements, losing Pro Bowl stalwart Brendon Ayanbadejo creates a hole on the coverage teams.

8. Catching on. Expectations are created by two things: contract status and draft position. That helps you shape your vision for the corps of receivers. None are highly paid or came highly drafted. Bernard Berrian is gone after developing into a fine deep threat and the Bears don't have a No. 1. The question is do they have a No. 2 or a team of No. 3's.

9. True leader. Veteran Mike Brown is beloved by Bears fans for all the right reasons. He's the emotional leader of the team and an outstanding player when healthy. The Bears are 14-2 in the last 16 games he's started and haven't lost a game he's started and finished since Oct. 9, 2005 at Cleveland, the loss that led him to assess that the team "sucked" at the time. But it's almost shocking the club has stuck with him as long as it has. As much as you'd like to dismiss his injuries as happenstance and bad luck, there's a track record here. He's never had a problem making it to the regular season healthy and his body must hold up. The question here is do the Bears have another free safety?

10. Return to form. As much as Brown's absence plagued the defense you can make a case the team missed cornerback Nathan Vasher more when he was sidelined 12 games with a torn groin muscle. Vasher is at full strength and should look like the Pro Bowl player he's been in the past. The defense also needs right end Mark Anderson to bounce back from a second-half slump.

So how did the Bears do in 2008?  Obviously, #1 was answered, albeit in 2009, but how many of these things from last year did not get addressed effectively enough, and will pop back up on 2009's list of things?