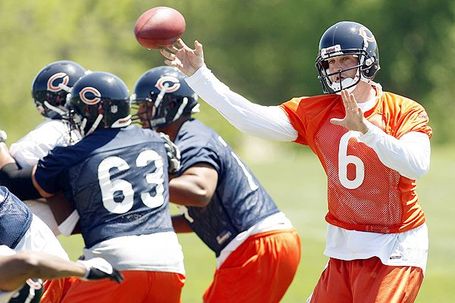 Finally, we've reached number one.  After 5 weeks, hundreds of comments, a bunch of entertaining and some times heated debates, numero uno is finally revealed.  There were plenty of suggestions along the way of Bears that could have been on my list, so next week I'll address some of the Bears I left off my list and a few reasons why.

So I present to you the most anti-climatic #1 in the history of sports lists!

Before Jay Cutler was traded, he was thought of as one of the top, young, up and coming quarterbacks in the NFL.  After the trade opinions of him went from traitor to savior, from egotistical to misunderstood, and from cry baby to small town boy.  Obviously most Chicago fans were quick to defend his actions, whereas Broncs fans wanted to vilify him.  Bears GM Jerry Angelo has his view of the quarterback position and acquiring Cutler;

"...we can't minimize the importance of the position. We've talked about that. I know personally it's been something that has been my goal for the organization and felt this was the right thing to do."

How important is the QB?  A lot depends on who you ask, but you can't argue with the championship potential a really good QB can give you.

While teams can win on occasion despite the quarterback, more often than not they win because of the quarterback.  The old saying goes ‘Defense wins championships'', but the reality is it's rare for a defense to carry a team to a Super Bowl win.  You need quality play from the QB to have success in the NFL.

Yes, there are teams that can win mainly on defense alone.  The 2000 Ravens won it all then promptly cut their starting QB (Trent Dilfer).  The 2005 Steelers overcame a terrible game by second year pro QB Ben Roethlisberger (a 22.6 QB Rating in SB XL... yuck...).  The 2007 Giants played great defense in upending the undefeated Patriots, but even in that game, after having a so-so season, QB Eli Manning came through and made a play for the ages.

In all, 22 of the 43 Super Bowls had a quarterback voted MVP.  Of the first 33 Super Bowls played, 23 of those winning teams had a Hall Of Fame QB take snaps in the game.  If you include future Hall member Brett Favre you can call it 24.  If you can find the "guy" to play QB, you're more than half way there.  And Jay Cutler is the "guy", without question.

His numbers have been dissected on this site and many others countless times, so I won't bother with his stats or record as a QB.  He's durable, he's mobile, and he has skills I've never seen in a Bears QB in my lifetime.  No disrespect to Kyle Orton, but Cutler is a far superior player, and will give the Bears a better chance to win in '09 and moving forward.