Share All sharing options for: Chicago Bears Come In #69! 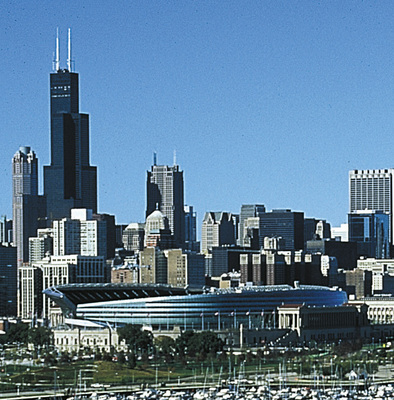 Get your minds out of the gutter...  ESPN The Magazine just released their "Ultimate Standings" issue, where they ranked every professional sports team by the value of the franchise to it's fans.  It's a complicated process, but very interesting.  The Bears ranked 69th for 2009, up 12 spots from last year; The Cutler Effect maybe?

After the jump I'll look at all 8 major ranking categories in more detail, and give a couple links to the ESPN piece to help explain their methodology...  well go ahead...  jump.

Here's the link to the piece, Ultimate Standings, and a direct link on how they calculated the value of a franchise to it's fans, The Method.

The Bears 69th overall ranking places them 18th among all NFL teams, and 3rd in the Chicago market.  Below the 21st ranked Blackhawks, the 47th ranked White Sox, and ahead of the 70th ranked Bulls and the 78th ranked Cubs.  I wonder how much the passing of Bill Wirtz helped the Blackhawks?  Two years ago the 'Hawks ranked 118th and last year they ranked 88th.  Wow, that's a serious jump.  Every team in the Chicago market actually improved their ranking.  Good news for Chicago fans.

Here's where the Bears ranked in all categories, among all 122 major sports teams (Overall), among the NFL franchises (NFL), and among the 5 major Chicago teams (CHI), what no Fire or Sky?:

TITLE TRACK:  Championships already won or expected in the lifetime of current fans.

OWNERSHIP:  Honesty and loyalty to core players and local community.

Overall 45 / NFL 11 / CHI 3 - The Blackhawks are 9th overall, and Jerry Reinsdorf has his White Sox 42nd and his Bulls 53rd.  Has Jerry been more loyal to the core players of his baseball team?  Ask Ben Gordon.

PLAYERS:  Effort on the field and likeability off it.

FAN RELATIONS:  Openness and consideration toward fans by players, coaches and management.

Overall 79 / NFL 17 / CHI 5 - Bears rank last in the Chicago Market?  Tsk, tsk, tsk...  And in the sub-category of Professionalism (players act professional on and off the field) the Bears ranked 92nd overall!  Don't the voters know Tank and Cedric are on the Bengals now?  The Bengals rank dead last by the way!

Overall 93 / NFL 23 / CHI 4 - Soldier Field parking is tied for the highest in the NFL at $40, and average ticket price is way above average, over $16 bucks higher!  The White Sox concessions ranked 20th overall.  Was that before or after the Ozzie Mows My Lawn T-Shirts?

STADIUM EXPERIENCE:  Quality of arena and game-day promotions as well as friendliness of environment.

BANG FOR THE BUCK:  Wins during the past three years (regular season plus postseason) per revenues directly from fans, adjusted for league schedules.

What does this all mean in the grand scheme of things?  Hell if I know!  It was just an interesting read and fun to research for the lull in the off-season.  Hope you enjoyed it.