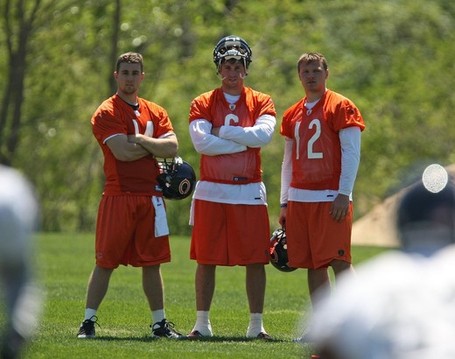 Over at the Bears official site, Larry Mayer sits down with the Bears QB coach, Pep Hamilton, to discuss Jay Cutler, Caleb Hanie, and Brett Basenez.

Excerpts of the interview to follow, but make sure you head over and catch the entire article

With Cutler’s ability to throw the deep ball, how much more will the Bears take shots down the field than they have in the past?

Just in my time here, when there’s been an opportunity for us to take a shot down field and make a big play, coach Turner has seized that opportunity. We had a lot of chances last year to make some big plays down the field and for whatever reason we didn’t. Jay’s arm talent and his ability to throw the deep ball is an asset, so I’m sure with Devin Hester’s game-breaking speed and his ability to get behind the secondary, I wouldn’t be surprised to see that play called a few times during the season.

How did backup quarterback Caleb Hanie perform in OTAs?

He did a lot of good things. He showed the poise that he’s shown since he’s been here. Being given a chance to get reps versus the first and second team defense was important for him. It gave him a chance to get a feel for what the play speed would be like during the regular season. But he’s still working at it. Training camp is going to be important for him. It’s going to be big. It’s going to be important that he comes into training camp in great shape and has the appropriate mental approach and perspective. But he’s coming along. He’s a young player who has a lot of potential. He’s just got to keep working at it.

What are your impressions of backup Brett Basanez?

He’s a hard-working guy. Brett is always at Halas Hall after hours studying film and going back to critique himself after practice. On the field, he’s shown some mobility as well as the ability to make the necessary throws. Brett doesn’t have a lot of play-time reps, but the potential is there. Both Brett and Caleb can make plays with their legs. They’re both athletic, and they can extend plays. Both guys have a lot of common traits. They’re smart kids who work hard. It’ll be interesting to see how the competition between them ultimately ends up.