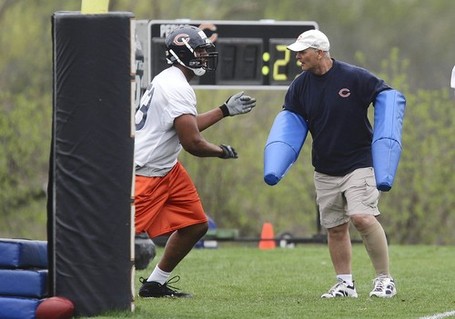 I'm of the opinion that the coaches need to put the players in the best possible positions, but ultimately it's on the players to make plays.  However, with the way the entire organization is pointing to Rod Marinelli as the greatest D-Line coach in the game today, the D-Line better step up and make an impact.  If they don't you can be sure topic #1 on the blogs, the message boards, the newspapers, and on sports radio will be Marinelli's ineffectiveness.

In particular I'm looking for sacks from the defensive ends.  Adewale Ogunleye has to find more consistency, Alex Brown needs to finally reach his potential, Mark Anderson has to find his rookie year form, and Israel Idonije has to show his new contract was money well spent.  The ends will need to rush the passer, play stout against the run, hold the edge and contain, and rush the passer...  did I say 'rush the passer' twice?

Rookie DT Jarron Gilbert, if Marinelli is the guru everyone says he is, should find some meaningful playing time.  His development, while not critical to the '09 season, is important to ensure the freshness of the defensive tackles.  The more quality players you have in the DT rotation just keeps the big fellas fresh (and hopefully healthy) for the entire season.

If the defensive line is effective the entire defense will fall into place; that's the main philosophy of what the Bears do, and the main reason the Bears defense has fallen down the last couple years.