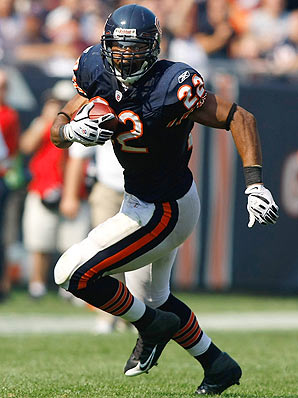 Different people have different feelings about fantasy football; some people feel that it takes away from watching a football game objectively, and that it makes it easier to root for different players rather than certain teams.  Others say that they can both enjoy fantasy football as well as be faithful to their favorite team.

I happen to fall into the latter group of folks, and being obsessed with statistsics and trends, can hold my own when it comes to playing in fantasy football leagues.  Sometimes, you run across some people who can really make a solid case for drafting a player that might not look good on paper.  And sometimes, a good argument can be made against drafting someone who looks great on paper.

All of this being said, are there any people out there who would say that Matt Forte is an overvalued or overrated player?  Sure, I can think of some Packers, Lions, and Vikings fans who would say it, just because their natural response to anything Bears-related is "They suck".  But honestly, objectively, could Forte be viewed in that way?

Well, in order to not steal ChiFan13's "Cretin of the Week" label, I'm going to call this bozo the Dufus of the Day, as he tries very unsuccessfully to make Forte out to be, in not so many words, a fantasy bust for the upcoming season.  I'll list out some of his reasonings after the jump, but make sure you read the entire article, and let us know what you think.

He’s a nice back, but many of us who saw him play last season would not say he’s a top-tier, stud running back. I think players who are taking him at his average draft position (ADP) will regret it at season’s end when he’s compared with other running backs.

Sadly, I thought last season may eventually be seen as one of his best.

I see newly acquired quarterback Jay Cutler not doing as many checkdown passes as Kyle Orton did.

I look for the team to open it up more and for the receivers and tight ends to see a jump in their receptions. That will come at the expense of Forte.

The KFFL team stated it best when they pointed out that he failed to rush for more than 70 yards in seven different games. Also, his 100-plus yard games came against some weak teams last season. Specifically, they were the Indianapolis Colts, Detroit Lions and St. Louis Rams.

Would any of you be concerned with drafting Forte in say, the top half of the first round of your FF league?  How many RBs are better than Forte in the NFL?