Break Out: Who Is the Sleeper WR?

Share All sharing options for: Break Out: Who Is the Sleeper WR? 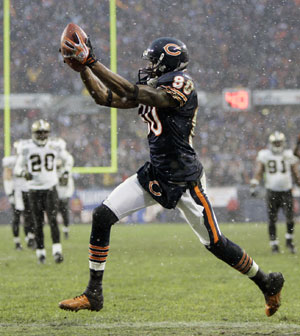 Before the NFL Draft, before any 2009 free agent signings, and before the trade for Jay Cutler, the Chicago Bears offense was pretty unremarkable.  Sure, we had Matt Forte, who we were at risk of running into the ground, and we had Greg Olsen, who had more receptions and touchdowns than any of our wide receivers, but those two players were the only "sure things" on our offense.

The offensive line was a question mark, the wide receiving corp was full of #3 WRs, and we had all decided that the "averageness" of Kyle Orton was good enough for us.  But, we had a ton of questions about our offense, which through the years was a common theme.

Fast forward to now, and really the only significant red flag about our offense is our wide receiver corp.  We have discussed ad nauseam what we should have done in free agency, and critiqued poor Rashied Davis even when the subject was the defensive line (yes, there was a thread a while back about the DLine, and it turned into a Davis Pinata), but we have who we think we will have headed into training camp.  And barring any unforseen injuries, we will have who we think we will have as the regular season kicks off.

That being said, we are all hoping beyond hope that our new hotshot QB can turn our WR corp into something worth being proud of.  Question is, who will become our WR "sleeper stud"?

Let's take some time to look at what we have:

Devin Hester:  5'11", 190 lbs.  All-World speed, and a threat to score every time he touches the ball.  Unpolished, but has been reported as developing in great strides this offseason.

Rashied Davis: 5'9", 180 lbs.   Moving back to the slot, where coaches think he will be more effective.  Has been known to drop a pass here and there.  See "pinata".

Juaquin Iglesias:  6'0", 204 lbs.  Rookie from Oklahoma.  Inetlligent WR with good hands.  Doesn't have great speed, but is quick off the line.

Fantasy football leagues are kicking off, and everyone wants to find that gem in the later rounds that will put up solid numbers.  Many folks talk about the ability of Jay Cutler to elevate the WRs around him... could one of our WRs be the next Marques Colston?