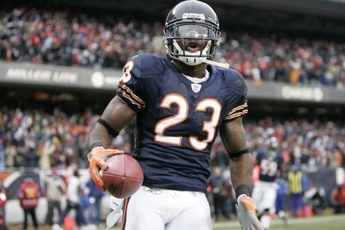 Last year, as the season wore on, teams punted to Devin Hester.  Think about that for a second.  After his first two record setting seasons returning kicks and bringing back punts teams were genuinely afraid to allow Hester to touch the ball.  Teams would rather kick out of bounds, giving up field position, rather than see the dangerous Devin Hester with the ball in his hands.  The Bears need that back.  They need that magic back.  They need the electricity that fills a stadium when Hester heads out with the punt return team, the excitement that comes from simple anticipation; quite simply the fear needs to return.

Did losing some key members of the special teams hurt the return game?  Was Hester preoccupied with his role as a receiver?  Was he trying to justify his new deal and ended up overanalyzing his game instead of reacting?

Whatever the reason, it has to be rectified in '09.  He's clearly a receiver now, he had decent numbers last season, and the pressure of the big deal is behind him.  The depth of the team will have another year of special team experience, and hopefully will gel this year.  Devin Hester has to be "Ridiculous" again.

As a receiver he has to take the next step in his game.  With Jay Cutler under center the deep ball will be on target, the zero route or bubble screen will see the ball get on Hester with enough time to make a play, and the slants will arrive before he gets to the next level of coverage letting him run to daylight.  If defenses have to cheat a safety over in fear of something deep, the middle and underneath stuff will be easy pickins for the other receivers.

In 2008, as the season went on, Hester improved his route running and he improved in recognition for route adjustments.  This year he needs to work on getting off the jam, Ron Turner won't have him constantly in motion (although he could), but Hester has to grow up as a receiver and do everything a receiver does.  With such inexperience at the wideout position, the Bears are counting on Devin Hester becoming a #1 receiver.

Devin Hester YOU ARE RIDICULOUS!!!