Share All sharing options for: D.A. is Devin Aromashodu

If you're were wondering who this D.A. is that the coaches and Jay Cutler kept referring to, you're weren't alone.  It is Devin Aromashodu.  How can such an unheralded player get so much publicity?  I love it when a player with no expectations takes advantage of an opportunity.  With such an inexperienced group of wide-outs, D.A. has as good a chance as any of sticking on the team.  As pointed out in The Bears Den by ChiFan13, chicagobears.com has a real nice piece about D.A.

Take the jump to learn more about this long shot (is he still a long shot?) to make the final roster...

Devin Aromashodu did some really good things in the OTAs. I'm really excited about him.

And since that time, every time a microphone is placed in front of Cutler, and he's asked about the receiving corps, he mentions D.A., most recently the Bears website had this nugget;

When Cutler has been asked about the Bears' receivers in training camp, he always seems to prominently mention unheralded third-year pro Devin Aromashodu.

"We're getting there. I'm real happy with the receiving group right now."

So who exactly is the 6'2" 201 pound Devin Aromashodu (uh-ROME-uh-shuh-do)?  He's lived the vagabond life of a player trying to catch on since he was drafted.  The Bears are his fifth team.  He was a seventh round pick (#233) of the Miami Dolphins in 2006 out of Auburn.  Then waived by the Dolphins in September of '06, but caught on with the Colts a few days later and signed to their practice squad.  After the '06 season he was resigned to the Colts practice squad, but subsequently released in August of '07.  Then a few months later the Texans signed him to their practice squad, only to have the Colts come calling again and sign him from Houston in November of '07.

It was during this stint where he finally saw some in game action.  He played in 6 games, getting 1 start, and ended the year catching 7 balls for 96 yards.  His employment didn't last long, as the Colts waived him a few weeks before the 2008 season was to kick off.  There was enough good film on him so only 2 days later the Redskins signed him for their practice squad, where he stayed until the Bears signed him on December 9th of 2008.  He was on the active roster for the final 3 games last year, but inactive for all 3.

That about sums up his professional journey so far, but lets go deeper.  I found this scouting report from Sports Illustrated from before the 2006 NFL Draft;

POSITIVES: Explosive receiver with an unpolished game. Quickly releases off the line, sharp running routes and gets separation from opponents. Comes back to the ball using his frame to protect the pass and adjusts to the errant throw. Possesses a burst of speed, playing faster than his 40 time and beating opponents in a foot race.

NEGATIVES: Constantly lets the pass get inside him and body catches. Lacks a sense of timing and anticipation. Rarely catches the ball cleanly and drops too many passes.

ANALYSIS:A solid athlete who can stretch the field, Aromashodu projects as a third receiver for a vertical offense. Needs to fine-tune his game and work harder to reach the level of expectation NFL scouts have for him.

His college career wasn't what you would call eye popping, in part due to the offensive philosophy of Auburn, but he was a four-year letterman who started 31 of his 51 career games (9 of 12 as a senior), with career numbers of 71 catches for 1,333 yards and 9 TD's (10th best ever at Auburn).  He ran a sub 4.4 40 leading up to the '06 draft which put him on a few teams radar.

But lets dig even deeper...  D.A. was a highly recruited High School player from Miami Springs and the football hot bed of Florida.  In the class room he carried a 3.2 GPA with a 880 SAT.  His heart was set on becoming a Miami Hurricane, but they had a couple other WR recruits, so they declined to pursue him.  He narrowed his choices down to staying in state and attending Florida, going to North Carolina State, or his eventual choice Auburn.  As a H.S. senior he was 6'2" 185, he ran a 4.4 40, with a 42 inch vertical.  He also played Free Safety at Maimi Springs (could a position change be on the horizon... just kidding) and lettered in basketball and track.

His size speed combo was what teams liked about him out of college, and is what I'm sure Jay Cutler like about him now.  He's matured as a receiver, has participated all off-season, and now getting reps with the starters from time to time has to be doing great things for his confidence.  With the way he's been getting talked up I can't wait to see him in the preseason.  Maybe then I'll be able to find a better picture of him as a Bear, one that doesn't chop off his head. 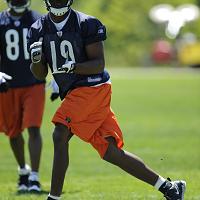