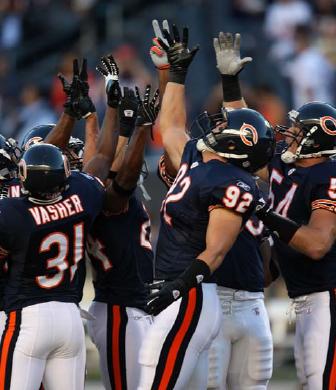 It's like being a little kid, and tomorrow being Christmas.  Only, we have already gotten our present (and possibly, the biggest present EVER), but now we get to really see what it can do.

Tomorrow at 6:00pm (Central Time), the Chicago Bears will take the field at Ralph Wilson Stadium to battle the Buffalo Bills in New York.

The Bills (7-9 in 2008) have a lot of question marks heading into their 2009 season, most notably their offensive line and their pas rush.  Let's get some 2008 statistics out of the way:

The Bills drafted two offensive linemen in April, Andy Levitre and Eric Wood, both projected to start at Guard.  Trent Edwards is expected to have a more productive 2009 campaign, largely in part to the addition of Terrell Owens to the wide receiving corp.  The offense has the potential to score a lot of points this season.

To help with the pas rush, the Bills drafted Aaron Maybin.  Maybin has been a hold-out thus far, but is expected to sign a contract at any time now.  Leodis McKelvin will be in his 2nd year, and should build on his productive 2008 rookie season.

What can we expect from the Bills in 2009?  They should be a threat to score some points, but that will largely hinge on the production from their OL.  Having two rookie starters might hinder their progress, but Wood and Levitre are both incredibly smart, and should improve in great strides as they get more snaps under their belts.  Defensively, the Bills need to strengthen their pass rush.  Not having Maybin thus far will likely hurt his contributions once he actually gets on the field.

Offensively, the Bears are a different team.  Jay Cutler will take the lead at QB; additions to the OL include Orlando Pace, Frank Omiyale, and Kevin Shaffer;  Kevin Jones is expected to be healthy, and will provide a nice compliment to Forte; the WR corp will consist of several first year players who have the potential to contribute immediately.

The addition of Rod Marinelli is considered by Lovie Smith to be the best free agency acquisition by any team in 2008.  Marinelli has high expectations in revamping the defensive pass rush, which was virtually nonexistent last season.  Pisa Tinoisamoa should help contribute to one of the best LB corps in the NFL, along side Brian Urlacher and Lance Briggs.  The secondary is the biggest concern, having seen position changes, and a few offseason injuries.  Their success will hinge on the pass rush up front.

What can we expect from the Bears in 2009?  If the OL can jell, we should see more points put on the board.  Cutler will make the WRs better than they look on paper, and the playbook will open up more than past years.  Defensively, it all starts up front.  Tommie Harris is a huge question mark, and will likely determine how successful the pass rush is.  There is potential on both sides of the ball, so we'll see how it all works out.  Special teams will once again be a huge advantage for the Bears.

As for the game versus the Bills, here are a few things to look for:

OL productivity:  Both teams have a new OL.  The Bears pass rush should see success against the young OL of the Bills.  The Bears OL will not have a very tough test against the Bills paltry pass rush, so we should see great success from our new guys.  All eyes will be on the Bears tackles, Orlando Pace and Chris Williams.

The passing game:  Terrell Owens will be out with a sprained toe, so the Bills will be looking at what they have without him.  The Bears will be looking closely at their young guys, and we should see Cutler throwing early and often.

Defensive pass rush:  As mentioned, this will be a weak spot for the Bills, but should be a strong suit for the Bears.  Look for Edwards to be scrambling a lot while the starters are on the field.

The preseason is not by any stretch indicative of success in the regular season, but with so many new pieces, this should be one of the most anticipated preseasons of all time for the Bears.  All three phases of the game will be in the spotlight, and we should see how much production will come from all of the offseason work.

Look for a Game Thread tomorrow here at Windy City Gridiron, as well as plenty of post-game analysis in the days to follow.  Get your popcorn ready!