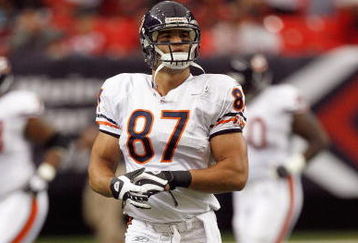 One Preseason game down and three to go. These games are meaningless as far as wins and loses go, but for the bubble players, the older vets trying to hold off the younger replacement, the new free agent trying to impress, and the rookie looking to make an impression, there are no more important games they'll ever play.

These fringe players need to get on the field as much as possible, not only to impress their coaches, but to get game film for scouts across the league to peruse. Players stuck behind established veterans go into the season knowing the odds for them making the team are slim, so getting reps in the games are so valuable. You can only see so much during training camp and practices. Playing against live competition, that are just as hungry as you, is the best way to determine roster spots.

The Tight End position for the Bears has been very stable the last few seasons. Desmond Clark and Greg Olsen form arguably one the best 1-2 combos in the league. Both are locks to make the final roster. Second year man Kellen Davis and free agent acquisition Michael Gaines are both looking to stick, and so far I don't see either having an obvious advantage over the other.

Kellen Davis is an athletic pass catching TE that should be a better blocker due to his physical attributes alone (6'7" 262 and solid). Former Detroit Lion Michael Gaines (6'2" 267) has been advertised as a better blocker with average hands. A fifth TE, former practice squad player Fontell Mines, has already been ruled out for the season due to injury and may end up an injured reserve.

The Bears need that third TE to be a blocker. Blocking in football is as much technique as it is power. But if you have both, you will have a nice career in the NFL. Losing John Gilmore a couple years ago hurt the short yardage run game. He was technically strong and physically imposing (6'5" 257). You need that nasty blocking TE that will stick his nose in there and work his tail off to get the job done. Olsen will never be that guy. His blocking has, and will continue to improve, but he's paid to catch balls. Clark has made himself into a better than average blocker after playing wide receiver in college at Wake Forest, but when you go double tight, and sometimes 3 tight end sets, you want, check that, need, a guy you can count on to make a key block. Last year the Bears used Kellen Davis in that role, and the signing of Michael Gaines should tell you all you need to know about their comfort level with him as the number three TE. Has Davis improved as a blocker? Last month Tight End coach Rob Boras had a few things to say about him on chicagobears.com;

Like everybody, he's a work in progress. He's getting better. ... We would like him to develop into being a dominant blocker for us, so to be that he’s got to play with better pad level.

At 6'7" I'm sure playing to high has been a problem he's had his entire football life. The hardest thing to teach a tall blocker is to stay low. Davis has a few inches on mostly everyone he's asked to block, so he has to condition his body to get lower through repetition, repetition, and repetition. An NFL TE has to be technically sound, he isn't going to overpower many defenders at this level. Will he put in the work to improve? A knock on Davis out of Michigan State was that he didn't work as hard as he should, it's something that has dogged him in first two years in Chicago, although I have yet to hear about a coach calling him out on his work ethic.

Michael Gaines has the ability to not only line up as a tight end, but to line up in the backfield as a fullback (or H-Back), something we've heard about but didn't see in the Buffalo game. He has versatility and experience over Davis to make the final roster, but Davis has the higher ceiling. If Gaines takes to a special teams role he could have the edge. Last year Davis was a productive member of the third phase, and this year he's been practicing as one of the 2 man wedge on the kick return team.

After just 1 preseason game, with Davis catching 2 for 29 yards and Gaines catching none, there really isn't a clear cut resolution to who has the job. There is an outside chance the Bears keep all four, but that would be at the expense of either a wide receiver or running back (I'll look at the RB position battle on Thursday). I believe Davis will be given at least one more year to show what he can do. If the Bears do go the Gaines route, they can forget about trying to stash Davis on the practice squad, he'll be picked up before he walks out of Halas Hall.

One last aspect to the TE position battle is Greg Olsen being named starter before the players broke a sweat on training camp. Not much of a battle, now was it? Desmond Clark, the true pro that he is, took the demotion in stride, but I don't like the starters being named in the meeting rooms. I prefer them to battle it out between the lines and may the best man win the job. With as many double TE sets the Bears utilize Clark will still see plenty of action, but for a guy that has started 92 of his 94 career games as a Bear, I think showing him the respect of an actual position battle would have made more sense.