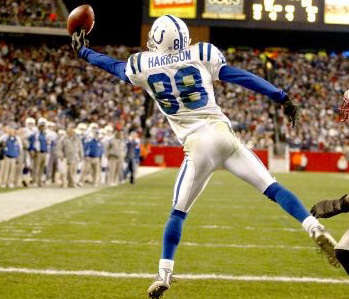 Upon his retirement from coaching football, Tony Dungy seems to have a lot on his plate.  He puts a lot of time into his charity, he is always being asked to do interviews and most recently he has become Michael Vick's mentor.  With all of that it seems that he wouldn't have so much time to get wrapped up in the Bears issues, but he has been.

First, he spoke out questioning Jay Cutler's leadership ability.  Now he seems to be trying to grease a path to get Marvin Harrison into Chicago.  It's almost like his new mission is to get every cast off football player a new home.

"Yeah, Marvin can play the game,'' Dungy said. "Marvin can get open and catch the ball. Marvin's whole thing is precision. And he's the guy that needs work in a system, you know. I think he definitely can play and I would encourage Lovie to sign him if they had that opening."

I'm on the fence with this idea. Having a guy with the experience that Harrison has it tempting, but would he come in at a good price and would he slow the development of the young guys by insisting to be a starter?

What do you think?