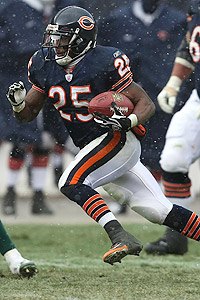 I found it odd the Bears didn't bother bringing in an undrafted free agent tailback to compete in camp and to play the fourth quarters of the preseason games. Last year they kept four on the opening day roster, so is it a given they will do the same thing this year?

Matt Forte could reach Pro Bowl status and Kevin Jones is healthy and in great shape. These two are obvious locks for the final roster and should be a formidable tandem if used correctly. I'd love to see Forte & Jones at about 60% / 40% on touches, a point I addressed right here last month.

Are Garrett Wolfe and Adrian Peterson comfortably on the final 53? What about the fullbacks? Last year the Bears kept only one, Jason McKie, but brought in Jason Davis when McKie was banged up and liked what they saw. And then what about rookie, and already fan favorite, Will Ta'ufo'ou? How many backs will be there on opening day?

Take the jump and see what I think...

I thought last year was going to be Garrett Wolfe's last chance to prove his worth. Even though he saw very limited action on offense, he really became a standout special teams player before he was injured. This year the Bears continue to preach getting Wolfe more involved in the offense, so does that mean their minds are already made up about him?

Adrian Peterson is a pro's pro. He does his job on special teams, he runs hard when he gets opportunities, he'll block, he can catch out of the backfield, it just seems like the Bears take him for granted. He has a solid year in 2005 with over 80 touches then rarely saw the field in 2006. In 2007 he has 51 receptions and over 500 yards rushing, not spectacular I know, but another solid year for a back-up. Last year with Kevin Jones ineffective, the Bears would rather drive Forte into the ground than get Peterson some carries (he only had 20).

Offensively these two bring different skills to the table, but at the end of the day neither will supplant Forte or Jones for many touches this year. It'll come down to special team play, and both thrive in the third phase. I can see the Bears bringing both these guys for the ride again this year, but if they decide to go an extra wide receiver, tight end, or even full back, I believe Peterson will be the odd man out. I think the Bears still view the upside of Garrett Wolfe as better than Peterson, even though we still have yet to see it.

I really can't see Jason McKie not making the final roster. For as many FB Dive jokes that float around WCG, McKie is a solid player. It's not his fault every person in the stadium knows when that dive is coming. He has better than average hands out of the backfield, he's a solid lead blocker, he's a good special teams player, and when used properly he'll pick up a tough yard for you. With as many double TE sets the Bears incorporate there really isn't a need to carry more than one FB. I think Davis will be the one left unemployed, with the Bears tyring to get Ta'ufo'ou on the practice squad. I wonder if after his one preseason game, has Will Ta'ufo'ou reached the legendary status of Mike Hass yet?