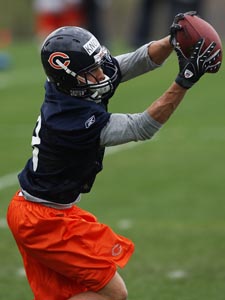 Last year the Bears opened the season with six wide outs on the roster (Earl Bennett, Marty Booker, Mark Bradley, Rashied Davis, Devin Hester, and Brandon Lloyd), but many Bears fans are speculating they only open up with five this season. Why? On paper the Bears should have a much more prolific passing game, so why not carry six again? Right now the Bears have ten receivers on the team, and in my opinion only two are definite locks to make the final 53, Devin Hester and Earl Bennett. Both had a couple catches against the Giants last Saturday, but who else is looking like 2009 Chicago Bears?

In preseason game 2, Devin Aromashodu made a heck of a catch, getting full extension to snag the ball for a 38 yard gain, and Brandon Rideau had two receptions and a special teams tackle. Those special teams contributions will be huge in making a final determination. Both seem to building steam for their chances on hanging around.

If Hester and Bennett are locks to stick, then Eric Peterman, John Broussard, and Derek Kinder have to be locks to be unemployed. I could see 1 or 2 of those guys making the practice squad if they go unclaimed. KInder is a guy I'd think could develop if he finds his way back.

So... 2 locks to make the team and 3 locks to be gone, and if my math is correct we're left with 5 players for 4 open spots (if the Bears carry 6 again). Rideau and Aromashodu have been getting all the publicity through OTA's and camp, and Juaquin Iglesias and Johnny Knox have the distinction of being '09 draft picks, but we can't forget about Rashied Davis. We can try to forget him, but I think he'll be back. He's received some first half playing time in both preseason games so far, and he is a more accomplished special teams player than the other 4 looking for work.

The Bears could cook up a mystery hamstring injury so they could stash someone on injured reserve, but I think Jerry Angelo may do something out of character for the franchise and release either Iglesias or Knox. And if they do they'll surely be picked up by a team looking for receivers. Thus far, my gut is saying Knox is the odd man out.

Here is what Larry Mayer from chicagobears.com, said on a recent Chalk Talk in regards to the receiver battle;

In terms of a player on the roster bubble, Devin Aromashodu's diving 38-yard reception certainly should give him a boost. The Bears likely will only keep five or six receivers, and it appears that Devin Hester, Earl Bennett and Rashied Davis are locks. If that's the case, then Aromashodu would be battling with Brandon Rideau and rookies Juaquin Iglesias and Johnny Knox for two or three positions. You also have to keep in mind that the Bears aren't necessarily going to keep the five or six best wide receivers. They'll keep the best three receivers and then the top two or three special-teams players at the position because the fourth and fifth receivers play primarily on the coverage and return units while rarely if ever getting reps on offense.

What does everyone else think?