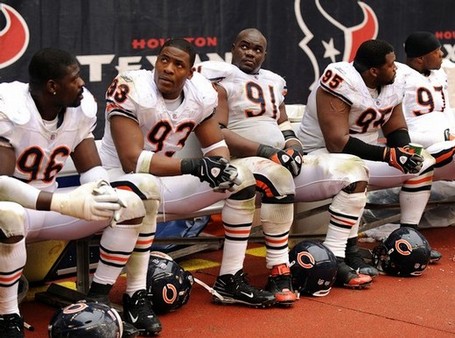 In playing the defensive line, the more versatile you are the better your chances are at sticking around, especially for the reserves. A guy like Israel Idonije will have a long career in the NFL because he can play every spot along the line. Last year the Bears opened up with five true DT's, three true DE's and Idonije. Before the '08 season Izzy bulked up to get more reps at DT, but he was still capable of playing DE. This year he got his weight back down (270) to play more DE, but he's seen action at DT in both preseason games so far.

With 13 defensive linemen on the roster as of today, versitality will be key in making final decisions regarding cuts.

Losing Dusty Dvoracek to another season ending injury (or is it...)thins out the depth at DT, but I thought he was on the bubble anyway. It's cliché to say, but no one works harder than Dusty when it comes to getting ready to play. Kid has battled back every year to get ready for the season, only to have lady luck frown on him again and again. I wish him (as I'm sure most Bears fans do) good luck.

Among the DT's, you have to figure rookie third round pick Jarron Gilbert is a lock to make the team. He's been getting reps at the 3 technique DT, but he has the speed and quickness to spell DE on occasion. Fellow rookie Henry Melton was drafted to compete at DE, but in the N.Y. game he was getting reps at DT. Versatile. Melton was sold as more of a project type, but I've liked what I've seen of him so far, and wouldn't be surprised if he stuck.

Of the true DT's sure to stick, Anthony Adams and Marcus Harrisonwill fight it out for the starting NT job, but both will see plenty of reps. Last year Harrison backed up at the 3 Technique, so I could see him getting some reps there out of necessity, along with the aforementioned Izzy Idonije who is listed as a DT, but will see action at DE, and will definitely be on the '09 roster. Versatile. Last year DT Matt Toeaina opened up on the '09 squad, I saw him as a bubble guy before the Dvoracek news, but now he might stick as the third NT. And of course, Tommie Harris will be around even if he's battling injuries all year. If you count Harris, Gilbert, Adams, Harrison, Idonijie, and Toeania as the 6 DT's you're left with the same 3 DE's as last year, for 9 defensive linemen total (same as last year).

DE's Alex Brown, Adawale Ogunleye, and Mark Anderson all look to be definitely returning this year. I haven't been very impressed with Mark Anderson since his rookie year (has anyone?), but I think he'll stick around to see if Rod Marinellican make him a complete DE. Both he and Ogunleye are in their contract year and I don't expect them both back in 2010. This year will be an audition of sorts; Does Adawale have enough left in the tank for 1 more Bears contract? Will Anderson show enough in '09 to warrant him getting a new deal? I expect Joe Clermond and Ervin Baldwin will be released.

So, if Henry Melton is to stay around, with the scenario I described above, the Bears would have to keep 10 D-Linemen. Highly unlikely. With Melton's size/speed combo he could be a core special teamer, but can the Bears justify keeping him over Toenia? Especially with the injury history of Tommie Harris? If Melton can make strides as a DT he might make the decision a tough one. The practice squad would be an option for Melton if he can be brought back. An alternative, as broached by SackMan, is to bring in a more established DT. I could see the Bears scouring over the veteran cuts and replacing Toeania before the season starts.

With regards to Melton vs. Toenia, you have to gauge need vs. upside. Is the potential of Melton enough to outweigh the need of another true DT? I'd like to see Melton make the team, but at what cost, I'm not sure.