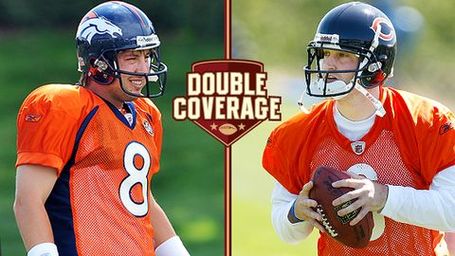 In possibly the most anticipated preseason game of 2009, Sunday's game in Denver will definitely have plenty of drama to go along with the actual football game.

We don't need to rehash everything, but it will certainly be interesting to see Kyle Orton and Jay Cutler square off against their former teams, as well as how the city of Denver will welcome Cutler back into his old stadium.

Orton will be without disgruntled WR Brandon Marshall, as Marshall was suspended through September 5th for insubordination.  Coach Josh McDaniels had this to say:

"I'm not sure necessarily if I think it will or I think it won't [work out]," McDaniels said. "I'm just hopeful that it will, because obviously he's a talented football player that we'd love to have pulling in the same direction as the other 79 guys that go out there and work their tail off."

While most eyes will be on the QBs, look for the rookies of both teams to try and make a splash.  For Chicago, Johnny Knox and Juaquin Iglesias are both fighting for a roster spot, and in Denver, Robert Ayers and Alphonso Smith will be looking to turn heads.  Rookie RB Knowshon Mareno is out after banging up his knee last week, but veteran Brian Dawkins is expected to play despite nursing a hand injury.

As for Chicago injuries, it is unlikely that Danieal Manning, Zackary Bowman, Jamar Williams, or Nick Roach will see the field on Sunday.

I also came across this article on the Bears official page that states Devin Aromashodu and Brandon Rideau are both competing against Rashied Davis for the #3 WR spot, and that the game in Denver should answer a lot of questions.

A fierce competition to be the No. 3 receiver will continue Sunday night in Denver with Devin Aromashodu, Rashied Davis and Brandon Rideau all in contention for the job.

"It’s very competitive, which is what you want," said receivers coach Darryl Drake. "Each guy brings a little something different to the table. They know what they’re competing for, and we’re just looking forward to seeing who’s going to be the best fit for us and who’s going to be able to be a guy who can come in and do the things we need him to do."

The game will air at 8pm Eastern/ 7pm Central time on NBC Sunday night.  We will have our Game Thread that day, a quick recap right after the game for all of us download our first thoughts and emotions of what we saw, and after it has all sunken in, more observations and breakdowns Monday and beyond.

Let us know what you are going to be looking for in the game Sunday... who to keep an eye on, who may be on the bubble, any other players that will be out due to injury.

Cutler vs Orton... it's gonna be a fun night!