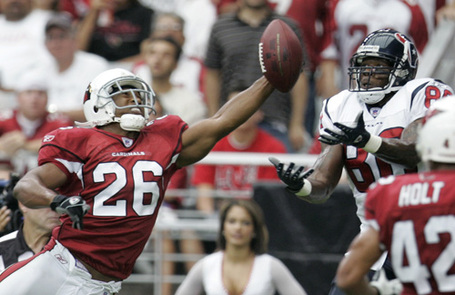 As alarmed as we have been about our defensive secondary woes, apparently the team has been as well.  Per this article, as early as Tuesday the Bears will sign 5 year veteran CB Rod Hood to a one year contract.  This does mean that they will have to make room for another player on the roster, so expect another move to occur with this one.

Veteran cornerback Rod Hood, who was released by Cleveland Monday, will sign a one-year contract with the Bears as early as Tuesday, according to multiple NFL sources. Hood took a free-agent visit to Halas Hall in May but opted to sign with the Browns. He has 11 career interceptions.

Hood, 27, entered the league as an undrafted free agent with the Philadelphia Eagles out of Auburn in 2003. After the 2006 season, he left the Eagles via free agency and signed a five-year, $15 million contract with the Cardinals. The 5-foot-11-inch, 196-pound Hood started 16 games in the '07 season then 14 in '08 as a member of the Super Bowl XLIII runner-up Cardinals. He also played in a Super Bowl XXXIX with the Eagles.