Addressing Some Snubs From My Top 10

Share All sharing options for: Addressing Some Snubs From My Top 10 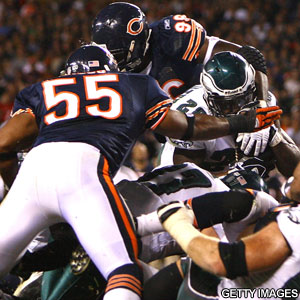 When I was asked to do "The 10 Most Important Bears in 2009", I knew it'd provide some good chatter during the off season leading up to training camp. I also knew these types of lists are so subjective and there would be no way I'd get it 100% "right" or "wrong" for that matter, which is why I really didn't argue with any suggestions or disagreements, because everyone has their own ideas and criteria for who would important for the 2009 season.

I was a bit torn on adding coaches to the list, as I've said before it's up to the players to make plays, but with the potential impact and with the way the organization was trumpeting Rod Marinelli as the D-Line coach and Lovie Smith taking over defensive play calling I felt they needed to be on there.

One thing I realized as I was compiling the Top 10 was every Bear on my list has an air of uncertainty surrounding them. Whether it was bouncing back from an injury, living up to potential, or trying to regain their past form. It wasn't my intention when I started out, it just kind of ended up that way.

Anyway, on to some snubs...

In regards to the defensive ends, by putting Rod Marinelli at #8 I was addressing any improvements the ends would make. If Alex Brown, Adewale Ogunleye, or Mark Anderson has a big year, everyone will immediately point to the acquisition of Marinelli as the reason why. It may not be true, but that is the story people will run with. "D-Line Guru Pays Dividends"

Personally I think Alex Brown will have his best year as a pro, he's always seemed to me like a very technically sound player, and with the push he'll get from Marinelli I think he'll blossom into a guy that could be Pro Bowl bound. He has been an alternate Pro Bowler in the past, so the jump isn't that unlikely.

Leaving Lance Briggs off the list was more due to his consistency and playing at a Pro Bowl level. I just expect him to do it again. Do I think he's an important part of the defense? Hell yes, I just think replacing the weak side linebacker is easier than replacing the middle linebacker in what the Bears do.

Placing a player that wasn't even listed as a starter at the time and who was having difficulties switching positions were the main reasons I left off Corey Graham. I do think he's a good football player and will see plenty of action (either at CB or FS), I just couldn't justify him on the list.

Charles Tillman kind of falls in the Lance Briggs category. I just expect him to be there and play as good as he can. Even with this latest setback I take him at his word that he'll be back around week 1. Obviously with the injury I might reconsider moving Nathan Vasher a bit up the list, but as it was I felt 10 was a good spot for him.

Olin Kreutz is another guy I just expect to be there all 16 games, he may not be the player he was, but he's still damn good.

Staying with the offense now, Earl Bennett was suggested by a few for this list. While I'm sure the Bears are counting on him to produce in his second year, I can't see his addition playing that big a role in the Bears success. I can see Bennett getting around 30-40 receptions for about 500 yards. Good numbers for a second year player, but not good enough to warrant inclusion on my top 10. If the Bears were going into the season expecting him to breakout and become the #1 receiver then I'd have him on there somewhere.

Greg Olsen was a guy that I tried to find a place for, but ultimately his talent led me to keep him off. I'll explain. Most NFL "experts" are predicting Olsen to be Jay Cutler's top target and most Fantasy Football sights are starting to throw Olsen in with the elite tight ends in the game. And I think most Bears fans are just kind of penciling him in for Pro Bowl berth right now, I know I am. With everyone expecting him to breakout, and with the quality of TE's on the roster, I just didn't think he was a fit for the list.

Lastly, a lot is expected from Chris Williams after barely playing last year, and as I said before if he were being counted to man the left tackle I'd have him pretty high on my list, but as the right tackle he didn't make the cut. I honestly wouldn't be surprised if Kevin Shaffer beat him out for RT. I hope he can't, as Williams needs to be good enough to start.

Hopefully next year at this time I'll be recapping my series, "The Top 10 Reasons The Bears Will Repeat As SB Champs"