Davis On The Bubble

Share All sharing options for: Davis On The Bubble 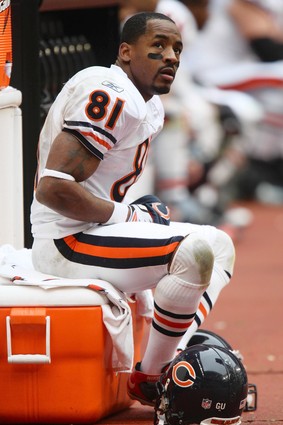 This morning on Chicago 670am WSCR, Zach Zaidman speculated that Rashied Davis may be the odd receiver out. Devin Hester and Earl Bennett are the obvious starters, they have both looked really good so far. The two new draftees, Johnny Knox and Juaquin Iglesias both have had their moments, and with Devin Hester sitting out yesterday with general soreness, Brandon Rideau had a chance to run with the number ones. He had a vey good day.

Later in a third-and-short drill, Rideau caught a Jay Cutler pass deep down the field despite having Vasher draped all over him. The 6-3, 198-pounder has produced big plays like that throughout training camp while lining up primarily as the No. 3 receiver.

Being in the Bears system should give Rideau an advantage, and when he's had his chances, he shown to be a playmaker. I hope he can find a home of this team.

I may be in the minority, but I see value in a guy like Davis. If the Bears are planning on any 5 wide-out packages, I could see them keeping 6 WR's. I think his special teams play could be an asset in the long run, as will his familiarity with the offense. What do you think?