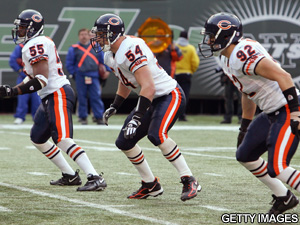 Linebacker is a definite strength of this 2009 version of the Chicago Bears. Lance Briggs is a perennial Pro Bowler, Brian Urlacher is one of the better middle backers in the game, and newly named starting strongside LB Pisa Tinoisamoa has me wondering what the Rams were thinking in releasing him. Tinoisamoa (does this guy have a nickname yet) has quickly become a fan favorite. His speed and big hits have endured him to the fans, and his versatility (he played weakside LB in the past) could pay dividends in the long run. The three starters are great fits for the Bears scheme.

Last year the Bears opened up with 6 LB's on the roster, and I expect them to do the same this year. Who will open up as the Back-ups? After the jump I'll throw in my 2 cents...

As it sits right now the Bears have 10 LB's on the roster, if they go with 6 again as I think they will, they'll have some tough decisions to make. Your reserve LB's all will need to be core special teamers, so how well they play there will go a long way in deciding who stays. I think it's safe to say undrafted rookie free agents Mike Rivera and Kevin Malast are gone. I think newly signed Darrell McGlover was simply brought in because the Bears had a few LB's nursing injuries, so I expect him to be cut. Although based on his past special teams success, it wouldn't surprise me to see him make the final 53.

Of the remaining 4 guys (Hunter Hillenmeyer, Nick Roach, Jamar Williams, and rookie Marcus Freeman) fighting it out for 3 spots, I think Williams is the surest bet to stick. Before his recent injury setback he was always getting his name dropped by the coaches as being a standout performer. His ability to play all 3 LB spots is a plus for him as well. Nick Roach was a surprise starter last year after Hillenmeyer went down, and as recently as last week Roach was listed as a tri-starter (is that a word?) at the SLB with Tinoisamoa and Williams, so my guess is Roach is safe.

Which leaves it between the rookie and the veteran. Has Freeman shown enough on special teams to make the squad? Last year Hillenmeyer, after being replaced in the starting lineup, was a solid special teams player. Defensively Freeman's been working exclusively at weakside LB, while Hillenmeyer can play all 3 LB positions. Do the Bears go with the sure thing in Hillenmeyer, or go with the potential of Freeman? If it were my decision to make, I'm keeping Hunter. I like his versitality, I think he can be trusted to do his job if he were thrust in the starting lineup at any position, and his football IQ has always been a strength of his. Financially speaking, cutting or keeping him would do very little to the salary cap moving forward, so if he is let go I can't see the money being a factor. Freeman might be a candidate for the practice squad if he isn't claimed, but if he is signed away, you can find an athletic LB to groom on the practice squad a lot easier than you can find a trusted veteran to contribute to your team.

With that being said... my guess is that HIllenmeyer will get cut. I think they'll go with youth, with the thought that their starting trio will see so much action, they can afford to go with the upside Freeman brings.

What does everybody think?