Share All sharing options for: NightLink: Spotlighting Some of 2009's Draft Class

As we revel in the glory of beating the Steelers, I thought it might be interesting to see how some of this year's draft class is doing so far this season.

Two games into the season, he is in the basement of the NFL with a 40.5 QB Rating.  Including the preseason, has thrown 9 INTs in 14 quarters. 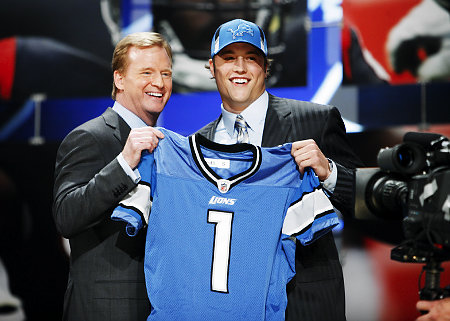 Held out due to contract disputes until August 7th, when he signed a 5 year/ $57 million contract with $31 million guaranteed.  Has registered 1 tackle so far this season.

Injured before the regular season kicked off, but was able to see the field by week 1.  Has 94 yards on 25 attempts thus far into the season (3.8 avg).

He is the team's leading receiver, with 8 receptions for 88 yards and 2 TDs.  Has stayed healthy so far.

And all of those high-profile WRs that everyone was clamoring about this past offseason (Darrius Hayward-Bey, Michael Crabtree, Jeremy Maclin, Hakeem Nicks, Kenny Britt, etc,)... well, the leading rookie WR in the NFL right now, who is also the #15 WR in all of the NFL, is 5th round selection Johnny Knox, with 8 catches for 152 yards and a TD.

Have you been following any rookies this season so far?  If so, let us know who you are keeping an eye on, and how they are doing so far in the season.