A topic that carried over from last year is offensive coordinator Ron Turner's play calling, and whether he is efficient enough to get us deep into the playoffs.  Some people say that he is too predictable, while others simply think the offensive productivity is simply a product of the talent he has to work with.

Let's take a look at the offensive play calling from the Seattle game, and see what we can make of it. 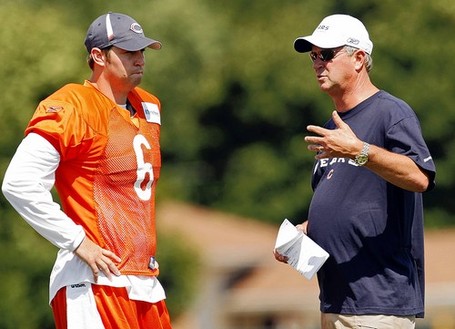 First, let's look at the number of plays, per down, in a rush versus pass ratio. I have removed plays that had penalties and turnovers.

Overall, the Bears had nine running plays that went for 4 yards or more, with four coming on 1st down, and five coming on 2nd down.

Say what you will about coach Turner's play calling, but these numbers show some pretty balanced and efficient plays.  Take away mental errors (penalties) and fumbles, and the numbers would be even better.  As has been stated in other threads, considering over half of our offensive starters have never played together before, we are doing pretty good.

Like WCG said, we are still at a point where we are starting too slowly, but when it counts the most, we are making plays.  Hopefully, as the season progresses, we will see an even more efficient offense on the field.