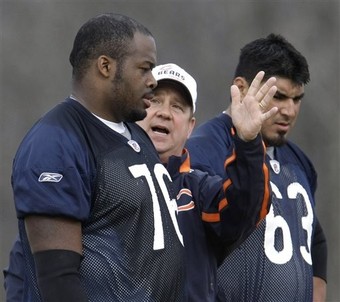 Rosters have to be down to 53 by tomorrow. Last nights game probably didn't do much to sway the coaching staff one way or the other. The swaying was mostly done during the off-season when Kevin Shaffer, Frank Omiyale, and Orlando Pace were added as free agents. These three will all be on the roster along with Olin Kreutz, Roberto Garza, Josh Beekman, and Chris Williams. No question about it.

Last year the Bears opened up with eight offensive linemen, including the injured Chris Williams, so taking more than eight isn't gonna happen. The above mentioned seven will be joined by only one other big fella. My guess is after the jump!

I guess I should eliminate some from consideration to make this easier... Center Donovan Raoila will get the axe, because both Beekman and Garza could back up at center, and Beekman looks to be the future at that position. Johan Asiata (I'll admit I never even heard of this guy til I looked at the roster) is a goner. Lance Louis, as much as I like his potential, just isn't ready yet. I'd like him on the practice squad. Which leave us with Dan Buenning and Cody Balogh. And after some deep thinking...

I can't see Balogh making the roster, and Buenning is more versatile. He's listed at guard, but he's played right tackle in the past, and could play center in a pinch.

Actually this was pretty cut and dry. Barring an injury the Bears ride with those eight.

Since there isn't much debate for a poll I'll take it in a different direction.