What about Mike Shula for Bears Offensive Coordinator?

Share All sharing options for: What about Mike Shula for Bears Offensive Coordinator?

With the track record of Lovie Smith hiring coaches he's familiar with, the obvious top candidate for offensive coordinator has been Mike Martz.  Although he's mainly a "top candidate" by the media and fans speculating on the situation, because I haven't heard anything definite by the Bears in regards to Martz.  When researching potential coaches that would actually fit the Bears M.O., I came across Mike Shula.  A coach not only with ties to Lovie, but with ties to the Bears organization as well.  Shula was the tight ends coach in Chicago from 1993-1995, yes he was on Dave Wannstedt's staff.  But if you haven't kept tabs on Mike Shula's career take the jump with me... 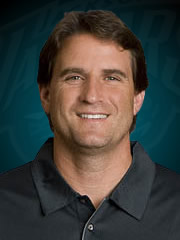 Before I get into his coaching resume, let me first address the supposed knock on Lovie Smith for hiring his "guys".  Honestly I don't see the problem with it.  Most coaches and/or General Managers in the NFL hire guys that they are familiar with.  The work day of an NFL coach is a long one, and working with people you feel you can work with is a plus.  Bob Babich being hired as a linebackers coach was a good move.  Promoting him to defensive coordinator... not so much.  Hiring Rod Marinelli to coach the defensive line looks to be a solid decision, but time will tell.  And the possibility of Perry Fewell being hired to be the Defensive coordinator, again the jury will be out.

Promoting Babich to D.C. coupled with the removal of popular Ron Rivera was the bigger issue.

Back to Shula.  He has 21 years of coaching experience, including a four year stint as the head coach at his alma mater, Alabama.  Prior to his time under Wanny, he was an offensive assistant in Tampa Bay (1988-90) and a coaches assistant in Miami (1991-92).  After leaving the Bears he was hired as the offensive coordinator in Tampa Bay (1996-99), under Tony Dungy (and on the same staff as Lovie), and they went to two playoffs in his four years in Tampa, all while saddled with Trent Dilfer under center.

He was fired after the 1999 season and returned to Miami, this time to coach quarterbacks, again under good old Wanny.  From his bio on jaguars.com;

Quarterback Jay Fiedler compiled a 21-10 record as a starter during Shula's tenure as Miami's quarterbacks coach. Fiedler became just the second quarterback in team history to surpass the 3,000-yard passing mark in 2002. He finished with a 60.7 completion percentage, the highest by a Dolphin since 1995.

After his second run in Miami he had his four year gig in Alabama.  Than after being sprung from that job he was hired as the QB coach in Jacksonville.  Again from jaguars.com;

During the last two years with Shula overseeing the quarterbacks, David Garrard has emerged as the club's starting quarterback. Garrard completed a career-high 335 of 535 passes for 3,620 yards in 2008 with 15 touchdowns and registered the first two 300-yard passing games of his career.

In Shula's first season with the Jaguars, the club set a single-season franchise record with 28 touchdown passes. Garrard ranked third in the NFL with a 102.2 passer rating and threw a NFL-low three interceptions. Garrard set the franchise single-season record for passer rating and highest completion percentage (64.0). He finished with the second-lowest interception percentage in any season for any quarterback in NFL history with 300-plus attempts at 0.92 (3 interceptions in 325 attempts).

Before being hired in Jacksonville, Shula found himself a top candidate to become the Head Coach with the Dolphins, even going as far as having a second interview with them.  But ultimately the job went to Cam Cameron.  Shula has been on staff in Jacksonville under Jack Del Rio ever since.

Would he be an ideal fit for Bears management?  Let's see... he has experience calling plays for an NFL team.  He has a familiarity with both Lovie Smith and Jerry Angelo.  He's shown a knack for getting his QB's to limit their interceptions.  I'm not sure exactly his train of thought as far as coaching, but looking over his body of work in Tampa Bay it's clear he favors the run.  Even while at Alabama he utilized the short passing game and a tough ground game.  So he would get off the bus running.  Then again, working with a player the caliber of Jay Cutler could bring out something different entirely.

Anyway, just another name to throw out there, and someone else to get our minds off the obvious candidates.  The longer this search takes the more I'm souring on Mike Martz.