Every team will turnover their roster from year to year, and with the Bears coming of a 7 win season they might do more than years past. After looking at the quarterback position last time out we'll stay in the offensive backfield and look at the backs. Both the tailbacks and fullbacks will go under the microscope today. 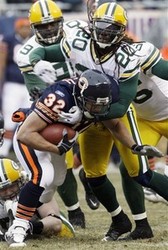 RUNNING BACK - Even though Matt Forte had a rough year, he's still the clear cut #1 moving forward. His health and the struggling offensive line led to some of his problems, but finding a guy that can spell him on a more consistent basis will be something that Angelo and Lovie Smith will have to figure out. The new offense the Bears will run will go a long way in determining the type of backs the Bears keep next season.

Matt Forte - Signed through 2011 - After rushing 315 times and catching 63 balls as a rookie, Forte saw his workload decrease to 258 and 57. While the Bears wanted his touches to go down I'm sure they were hoping his average yards per carry wouldn't go down as well (from 3.9 to 3.6). With his skill set, great at blitz pick up and great hands, I wonder if he'd be better served as the change of pace guy? (Just thinking out loud here...) He may be, but not next year, Forte will be the #1 guy, with the hope that he can build on his success. And if he's 100% healthy starting off the season maybe we'll see a different Matt Forte.

Kahlil Bell - under contract terms undisclosed - Bell should be back and be given an opportunity to compete for a back up position. In his limited attempts he looked like an NFL player, and his debut is now entrenched in Bears lore. If he can get himself on the field more on special teams during training camp, it'll only increase his value.

Adrian Peterson - Free Agent - Most Bears fans would probably like to see Peterson return, but with the way contracts are structured in the NFL I don't see any scenario where the Bears bring back the 8 year pro. With his special teams prowess he'll play somewhere in 2010.

Kevin Jones - Signed through 2010 - Last year at this time I predicted he'd be an ex-Bear, and this year I'm predicting the same thing. Can the Bears really go into a season counting on the tough luck Jones, especially with the way Bell looked in his few attempts? In 2010 Jones is due $1.15 million and a $350,000 workout bonus so my guess is the Bears will look to save some cash and cut him.

Garrett Wolfe - Signed through 2010 - After hearing the promise that Wolfe would be used more in 2009 we saw his touches more than double, but it was still nothing impressive. And he finished the year on injured reserve again. He's set to make $550,000 with some incentives possible, but him staying on is 50/50. His solid special teams play may save his roster spot next year.

Jason McKie - Signed through 2011 -As much as fans make fun of the ‘fullback dive' and McKie in general, he is a solid fullback. His offensive playing time decreased with the emergence of more double tight end and multiple receiver sets, but he's a valuable contributor on special teams. He'll be back at least to compete for a roster spot next year.

Will Ta'ufo'ou - Signed a reserves futures contract -Preseason fan favorite Ta'ufo'ou will be in camp, and if he doesn't beat out McKie, he'll be a practice squad candidate. If by some off chance the new offensive coordinator places more emphasis on the fullback position the Bears may carry two of them, and he'll see his chances of sticking increase.

2010 RB OUTLOOK - With the Bears only having a handful of draft picks I don't see them taking a flyer on a back in the draft. If a talent slips down to them they may surprise, but as stands now they have more pressing needs to address on draft day. Picking up a legit free agent to spell Forte could be done, but any fans thinking Darren Sproles or Chester Taylor should think again. They'll be out of the Bears price range. Atlanta Falcon Jerious Norwood, after playing in only 10 games, falling to 3rd string, and having a down year has proven to be what he is (strictly a change of pace back), so he may be a possibility if the price is right. Look for the Bears to bring in at least one free agent rookie RB to compete in camp.

Click here for my look at the quarterback position.