Even though Lovie Smith stated in his press conference today that the team would take it's time finding a replacement for Ron Turner, we can still start making a case for who the top three will be.  Here's my take:

1- Jeremy Bates.  He was Cutler's QB coach in Denver, and bolted to USC after all the drama went down.  Cutler was very disappointed that Bates left, and there was speculation that Cutler would have stayed in Denver had Bates stayed. Bates is a young, up-and-coming coach, who many believe will be on the fast track to an NFL head coaching gig in the near future.

2- Mike Martz.  Shortly after Turner was fired, Martz went on record to say he'd be interested in the job if Chicago wanted him.  Martz has seen success in the NFL, and having a QB like Cutler would be an interesting project for him.  Like many have stated, high risk- high reward with Martz.

3- Charlie Weis.  Chicago would be close to home for Weis, and his return to the NFL as an OC was inevitable.  He has seen plenty of success at the NFL level... the only thing is, would the Bears be interested in Weis?

Those are my top 3 choices, but there may be other candidates out there who haven't gotten fired from their current teams yet.  Also, there may be some other college names out there that the Bears want to look at.

All in all, we shouldn't expect this to be a quick decision. 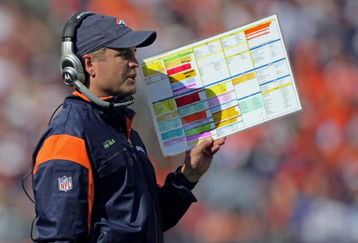