3-0 travels to 1-2, but who's really favored?  According to the wise guys in Nevada, the Giants should take this one.  But I think we know better.  The Bears are rolling right now.  They have gone out and beaten preseason darlings Dallas and Green Bay in consecutive weeks.  Jay Cutler and Mike Martz simply have got it together.

The Bears, as a whole, are taking care of the football and taking it away from the opposition.  Our play makers on offense, on special teams, and especially on defense are making big plays at big moments.  Now they go to the biggest stage.  New York (really New Jersey) on Sunday night on NBC.

175: Number of rushing yards the Giants had that day... will not happen again.

When New York has the Ball:

The Giants have a well-balanced offense, in theory.  They can run bulldozer Brandon Jacobs or quick footed Ahmad Bradshaw.  They have Super Bowl winning QB Eli Manning throwing to Steve Smith and Hakeem Nicks.  In practice, the Giants offense has been limited by a very suspect offensive line.  Eli, meet Julius Peppers.  The Bears have been very successful stopping the run this season.  If they are successful again on Sunday night, the Giants will become one-dimensional making Eli, who is not the most fleet of foot, a huge target for the Predator. 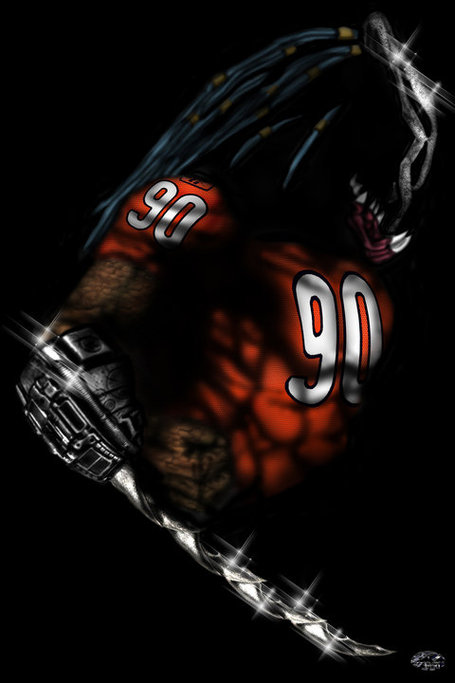 Key Matchup:  Julius Peppers vs. LT David Diehl and RT Kareem McKenzie. If Peppers plays like he did Monday, look for a lot of penalties again.  NYG was flagged for 11 penalties against Tennessee last week.  Diehl and McKenzie each got a personal foul called against them.  If they get rattled by JP, well, it should be fun.

X-Factor: The Cover-2.  The Bears ran this a lot against Green Bay and Rodgers picked them apart, but the Bears held on.  Is Eli as capable as Rodgers (no), but he's got some skill and he has quality receivers to get it done.

When Chicago has the Ball:

The "vaunted" Giants defensive line is not what it once was.  They are 26th against the run, allowing 137 yards per game.  But they are only allowing 3.8 ypc (11th) so the total number isn't the whole story.  The Bears have been unable to run the ball against anyone.  Will Martz stick to the run game at all?  The Giants have the 4th best passing defense, so the Bears might be forced to run to move the chains.

X-Factor: Devin "You are Ridiculous" Hester of course.  NYG Head Coach Tom Coughlin has come and said publicly that they will punt out of bounds to keep the ball out of his hands.  We'll see if that's true come Sunday.  But Devin has his mojo back (insert Austin Powers joke here).  If they kick to him, he'll do something electric.  If they kick out of bounds, the offense will have great field position all day.

The Giants, as a whole, are the last ranked special teams unit in the NFL.  Special Teams will play a big role on Sunday night.