Share All sharing options for: Five Questions With: Field Gulls 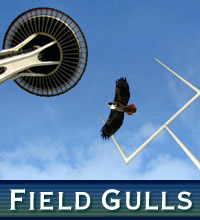 Big thanks goes out to John Morgan, the Wyatt Earp of SBN's Field Gulls, for taking time to answer our questions.

1- Tell us about having Pete Carroll in Seattle... is the fanbase supportive not only of him, but of the overall management of the team? Do you like the direction the team is headed?

FG: Football fans typically embrace their head coach, for good or ill, and given Pete Carroll's high profile, success at USC and the man he's replacing, Jim Mora, most Seahawks fans seem pretty happy with Carroll. The Seahawks are 2-2 and have won both home games, so it's early and it's easy to stay optimistic if that's your wont. We will see what people think if the team collapses, and just as importantly, we will see how Carroll handles it. This time last year, few predicted Mora would be fired, but by late November, it became a foregone conclusion.

Fans are a little more ambivalent about general manager John Schneider. That's common, because the world of roster construction is much more of a black box, and outsiders can never be entirely sure the motivation behind moves or even what moves are possible. When a few fan favorites were shipped out for late round picks, it set off a fury, but we don't really how likely it is that Seattle could re-sign Darryl Tapp or Josh Wilson, or what the market was. Schneider earned goodwill through the draft and none of his more controversial trades have yet to blow up, and so I think people are guardedly optimistic but maybe a little worried at the same time. Like Carroll, it's early.

As for the direction of the franchise, I think most of us are happy that Seattle might be able to contend for a playoff spot this season, but also fearful that short tem success built on the failure of the division might set back the franchise long term. Given how much of Seattle's success, and I mean that loosely, is built on a run defense that was already mostly built and the overall weakness of the NFC West, even a playoff appearance wouldn't confirm a positive direction for the franchise. Sometimes, bad teams stumble into success and eventually are worse off for it.

2- What are the biggest strengths and weaknesses on offense and defense for the Seahawks?

FG: The biggest strength on defense is the ability to stuff the run, especially against traditional rush-first offenses, and an ability to intercept passes. Earl Thomas, especially, has very good ball skills, and Lofa Tatupu, David Hawthorne, Marcus Trufant and Jordan Babineaux are all interception threats. The Seahawks pass rush isn't great, but Chris Clemons is a pretty good speed rusher and he might present problems for the Martz offense.

The biggest weakness on defense is the ability to create pressure without blitzing. Given the construction of the line, Seattle depends on Clemons to provide pressure from its base defense. Left defensive end Red Bryant is more or less a defensive tackle or 3-4 end playing a 4-3 end, and though he is quick for his size, he's not a huge pass rush threat. Colin Cole is exclusively a run stuffer. Brandon Mebane is disruptive, with a good first step and good hand fighting, but doesn't move terribly well in space and isn't an ideal under tackle in Carroll's system.

The biggest weakness on offense is the offense. Matt Hasselbeck looks two years past expiration, incapable of challenging safeties deep and incapable of throwing into small windows. The line isn't great and isn't geared towards one style of blocking or another, though Seattle is nominally running a zone blocking scheme. The receivers are talented but mostly young, and more importantly, can't throw the ball to themselves.

The rush offense suffers the pass offense, facing safeties in the box, linebackers that crash the line, run blitzes and other aggressive run stuffing tactics. It's nowhere near capable of withstanding all that, and the run offense, formerly spearheaded by situational back Justin Forsett and now "saved" by Marshawn Lynch, has actually underperformed the pass offense. The run game is salvageable, we hope, but not how it's currently constructed.

Both the pass offense and run offense have talent, but neither is likely to show it until Hasselbeck is replaced.

3- Aside from the well-know players on your roster, who are some players who might fly under the radar but still make significant contributions to the game?

FG: Bears fans should probably know about Chris Clemons and Earl Thomas. Thomas is semi-famous because of his draft placement and his popularity with draft analyst Mike Mayock. I mention him because his role defending deep, in-breaking routes could be essential to the outcome of the game. He has the talent, recognition and ball skills to take over a game, but he's also a rookie and liable to make rookie mistakes like chasing misdirection and biting on pump fakes and play action.

Clemons is an interesting experiment and one I have to commend Seahawks defensive line coach Dan Quinn for undertaking. He has bounced around the league as a situational pass rusher, but Seattle did something daring and designed a defense in which he could start. The obvious problem the Seahawks needed to overcome is, how to start a situational pass rusher and not completely undermine the run game, but so far, Seattle hasn't just survived against the run, the Seahawks have one of the best run defenses in football.

Clemons is noteworthy to Bears fans because he's a quality edge rusher that can beat a tackle around the corner and create havoc in the back field. That's pretty much all he does, but against a pass wacky offense that uses a lot of seven step drops, one could see Clemons having a career game.

4- What are some key match-ups you'd say to look out for on Sunday?

FG: Clemons against the left tackle, as mentioned; Thomas on deep patterns, so presumably defending Johnny Knox and Devin Hester; apart from that, Russell Okung against Julius Peppers, which should favor Peppers. Okung is talented as hell, but he's inexperienced and his recognition is a little lacking. The Bears interior defensive line should have a pretty good go against Ben Hamilton and Stacy Andrews. Israel Idonije should work over Sean Locklear or Tyler Polumbus. I think Locklear will start but that might be short-lived. There isn't really a matchup for Hasselbeck, but aggressive corners that play the ball can snag a few of his floaters, and so that might turn the tides.

5- The Seahawks have scored a total of 58 points in their two impressive wins (Niners and Chargers), but only 17 combined points in the two losses (Broncos and Rams). Can you talk about the offensive situation for you guys, and whether you think that it can find some consistency at some point?

FG: Points scored are a pretty poor measure of offensive performance. Seattle has played four games, maxing out at 339 yards of total offense and otherwise finishing with 242, 257 and 271 yards of total offense. So the Seahawks have been plenty consistent, consistently bad. Points off turnovers allowed them to beat the 49ers and two long kickoff returns provided 14 of the 27 points Seattle scored against the Chargers. Other than that, there's hasn't been much more than superficial differences between how the offense has performed. It ranges between decent in spurts (week 1) to terrible (week 4).

We're pretty much expecting something like Week 4 from the offense, plus some points added through turnovers and special teams play.