Share All sharing options for: Five Questions With: Hogs Haven 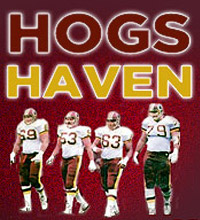 A big tip of the helmet to Kevin Ewoldt, one of the Head Linesmen at SBN's Hogs Haven, for taking the time to answer our Five Questions. Make sure to check out their version of this post here.

1- Can you tell us what it means to the Redskins organization to have Mike Shanahan coming in and not only acting as the Head Coach, but also having the final say in football decision as the Executive VP of Football Operations?  Also, what is the relationship between Shanahan and GM Bruce Allen?

HH: It's impossible to articulate what Shanahan coming in means. Things were stable when Joe Gibbs was here, but when he left, Snyder and Cerrato buried this team with their free agent moves that the coaches had to work with. Defensive Coordintor Greg Blache didn't want Jason Taylor or Albert Haynesworth, but they signed him anyway. Trading away draft picks has killed this franchise. Shanahan immediately brought back a winning attitude. I talked to some players who said they knew the season was lost last year in pre-season because of Jim Zorn's idiocy. It's a complete 360 with Shanahan. All the players have bought into his credibility and it shows on our record because we've willed some 4th quarter wins when in previous years we had not. (answer continues after the jump)

As for Bruce Allen, he's mostly a PR guy. Shanahan has full control of the roster, but Bruce works hard on working salary contracts. His father of course was legendary Redskins coach, George Allen, so Bruce has an immediate connection with fans. Bruce has spear-headed the initiative to reconnect with the Redskins alumni and improve the game day experience at Fedex Field. He's getting high marks for his work in DC. I guess that's not hard to do when you're following in Cerrato's footsteps.

2- How does the fanbase feel about Donovan McNabb, and do you see him being re-signed after this season?

HH: Fans love him. The only similarity between Jason Campbell and McNabb are they're both nice guys. McNabb is a true leader, which is a must quality for a team. He's smart and he can make plays out of nothing as he's done his whole career. The quotes from McNabb's teammates all summer were genuine in how much he means to this team.

Several players including McNabb said he's not going anywhere and I believe that. Should the Colts be worried Peyton Manning's not signed? No. Some fans are worried but I am not one of them.

3- What are the biggest strengths and weaknesses on each side of the ball for the Redskins?

HH: Offense: The rushing game has not been strong, which is partially a result from losing Portis. The next 2 RBs (Torain, Chad Simpson) on the depth chart were not even on the original 53-man roster. Ryan Torain was with the team all of camp and has run the ball real hard the last 2 weeks. He's consistently getting hit in the back-field which the Bears I'm sure will do as well. The Skins have scored a lot of points well off misdirection plays so look out for that.

Defense: Although their ranked 32nd in most categories, they're ranked 14th in points allowed. The bend but don't break model is being bent to the max. The Redskins run D has been atrocious. This is primarily due to the fact the Redskins run a 3-4 and don't have a capable Nose Tackle. Haynesworth is back this week which should help immensely. The Redskins are great at blitzing although the last few weeks they've played more of a Cover-2. Given how bad the Bears OLine is, I'd expect Haslett to send Landry and Orakpo in most plays.

4- What are some key match-ups to watch out for in this weeks Bears- Redskins contest?

HH: Orakpo has been a monster this year. He's getting consistently held by Tackles, so prepare yourself for a few of those penalties. Chris Cooley has been our best WR this year, so hopefully he'll play coming off that concussion from this past week. He's a master of getting open. Jammal Brown, our RT, has been a huge disappointment so far this year. I'd expect to see Peppers lined up over him often.

5- Who is a player or two that we might not know about that could really make an impact for the Redskins this week?

HH: Brandon Banks definitely comes to mind. He's an undrafted free agent rookie with blazing speed. He's 5'7" 150 lbs but has been doing extremely well on returns. He had a bad case of fumblitis during pre-season, but has been OK so far. Hopefully I didn't just jinx him.

Again, a big shout out to Kevin for doing this, especially considering I didn't exactly give him a lot of time to work with.  You da man!