Share All sharing options for: Five Questions With: Buffalo Rumblings 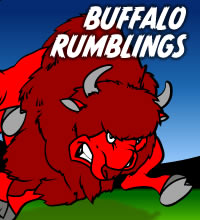 There are a couple of different perspectives on the Bears-Bills game this weekend... one could say that the 0-7 Bills are who their record says they are - a terrible winless team, or it could be said that the Bills have played an absolutely brutal schedule to date, and have actually been quite competitive as of late.  With the Bears losing three of their last four contests, including two straight at home, I'd definitely take the cautious side in approaching the Bills on the road.

A great big tip of the helmet to Brian Galliford from Buffalo Rumblings for taking the time to drop some knowledge for WCGians about their team and what we can look out for. You da man, Brian!

1- The Bills are winless, but five of your losses were by a score or less.  Your schedule thus far has been absolutely brutal (Dolphins, Packers, Patriots, Jets, Jaguars, Ravens, Chiefs).  Throwing out wins and losses, what kind of team is the 2010 Buffalo Bills?

BG: The biggest compliment I can give this Bills team is to call them scrappy. They don't play like an 0-7 team; they go out and compete to win, and they can play some very entertaining football in the process.

Buffalo is a pass-first offense at the moment, and when Chan Gailey is able to find balance and rhythm, they've got a lot of players that can hurt defenses. Defensively, they're awful, but they've done fairly well recently in the scoring department, allowing 16 points in what basically amounts to their last six quarters (and five minutes) of field time. They're not a very good team, clearly, but they're not the pushover cupcake everyone thought they were just two weeks ago.

2- Can you talk about the organizational structure a little bit?  You guys have a lots of chiefs (Ralph Wilson, Russ Brandon, Buddy Nix, Jim Overdorf, Doug Whaley, Chan Gailey)... what is that dynamic like, and in what direction do you see this team going?

BG: If I had a beat on how this front office worked, I probably wouldn't spend so much time gnashing my teeth over the team's inexplicable decisions. Like giving DE-turned-OLB Chris Kelsay a massive contract extension.

Ralph Wilson is the owner, and Russ Brandon is basically his proxy in Buffalo, as Wilson lives in Detroit. Brandon runs the marketing arm of the team, and facilitates communication between Wilson and Nix. Nix, the GM, is in charge of the football operation, and Doug Whaley, his assistant, runs the pro personnel and college scouting departments so that Nix can work more closely with Gailey. Nix and Gailey are building this roster, though I'm quite certain Wilson's whims factor into their decisions. Overdorf really isn't a factor at all; he simply negotiates the contracts.

Or at least that's how it's supposed to be run. But really, I have no idea what goes on behind closed doors.

3- Let's talk about injuries for the moment.  How big a role has injuries played this season for you guys, and what is the prognosis on the rest of the season?

BG: Unlike 2008 and 2009, when the Bills were the unhealthiest team in the league, they've been relatively healthy in 2010. They've had odd starters down for a game or two here and there, but mostly, they've been consistently healthy. This is specifically true along the offensive line, where the Bills were absolutely torn apart a year ago; Cornell Green has missed the last two games at right tackle, but he's so bad we've barely noticed.

4- There are plenty of names that everyone recognized on your roster, but tell us about a player or two that might be under the radar but could easily make an impact this coming Sunday.

BG: The go-to name at this point is third-year wideout Stevie Johnson (13), who is having a rather remarkable season in his first year as a starter. He's caught 30 passes for 409 yards and six touchdowns through seven games, and has become more of a go-to target than Lee Evans has been in recent seasons. Johnson isn't a remarkable athlete, but his movement skills - that's the best way I can describe them, because you have to actually see him run routes to understand how unique a player he is - make him very difficult to cover.

Defensively, keep an eye on rookie outside linebacker Arthur Moats (52). I know how much Mike Martz likes to throw the football, and the Bills have been using their sixth-rounder out of James Madison as a pass rusher in recent weeks. Buffalo's pass rush is pretty terrible, but Moats has shown flashes of ability as a stand-up rusher, and his motor is relentless. He might be the team's best pass rusher already, which speaks more to the team's woes than his talent. Still, keep an eye on him.

5- What are the biggest strengths and weaknesses on both offense and defense for you guys, and what are some key match-ups to watch for this weekend?

BG: Our biggest strength offensively is Chan Gailey's ability to find good matchups in the passing game and exploit them. Evans is a great deep threat, clearly, but he's also finding ways to get the ball into the hands of Johnson and Roscoe Parrish as receivers. Parrish, in particular, is coming off a very strong game in Kansas City. Even rookie David Nelson, the fourth receiver, has been outstanding as a possession guy.

Defensively, I really can't claim that the team has any strengths. Their secondary is deep, but hasn't been playing very well. We've just been waiting for a pass-happy team to try to beat us through the air, rather than pound it on the ground all game, and our fingers are crossed that Mike Martz delivers the goods. Buffalo can limit scoring against a team with a hit-or-miss QB and a tendency to abandon the run.

Bonus question: Predict the final score and we'll send you a peppermint.