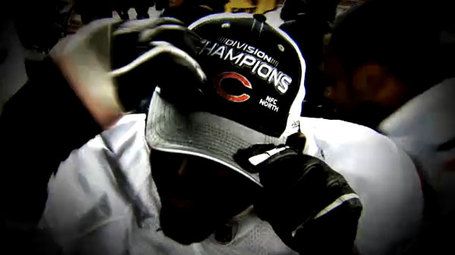 We’re all beyond excited to have won the game against the Vikings and clinched a spot in the playoffs. This was a total team effort and might have been our best all-around performance of the season.

Offensively, we did a tremendous job scoring points by racking up 40. Defensively, I think we played a very dominant game. Sure, we started out a little slow by giving up a touchdown on the first drive, but, after that, we really settled down and got our swagger back. All together, we were able to get 5 turnovers (3 interceptions / 2 forced fumbles), and that feels real good, seeing as how we had just, uncharacteristically, gone 2 games without getting a takeaway. We’re definitely peaking at the right moment.

I wanna give a very special shout-out to Devin Hester, the baddest man to ever return kicks. He set an NFL record by becoming the first player to collect 14 combined punt and kick returns. What’s most incredible about this is he did it in only five years! Brian Mitchell previously had the record, but it took him many, many, many more seasons to accrue is 13 returns. I feel so privileged to not only have witnessed history, but also to have been a part of it -- I was wearing the same jersey as he was, so that makes me feel much closer to his special moment.

We may have clinched this thing, but we still have a lot of work to do. We’re definitely not letting up. This is just our first step towards our ultimate goal: winning the Super Bowl. We have to keep winning, because even though our ticket has already been punched into the postseason, we want to a first round bye in the playoffs. In order to do that, our goal has to be to stay ahead of Philly.

I swear -- It feels like I never left Chicago. Last time I was here, before spending time with the Panthers, we went to the playoffs, and now here we are going again. Don’t believe me? ...Well I’ve got me a nice t-shirt and hat to prove it ;-)

P.S. I'm announcing the winner of the "Bear Down 2.0 Fight Song Contest" tomorrow. So stay tuned...