Taking a Look in the Bears History Book: Harlon Hill

Share All sharing options for: Taking a Look in the Bears History Book: Harlon Hill

Welcome back to the next edition of TLBHB! Today we're going to look at a Bears player from the 50s, Harlon Junius Hill. Hill played for the Bears from 1954-1961. However, before we start delving into the NFL life of this man, let's take a look at what made him desirable in the pros: his college career.

Hill went to Florence State Teachers College (now known as the University of North Alabama). He was a well-known offensive end there, and was named an NAIA All-American his senior year.

Come with me after the jump to look into Hill's time with our beloved Bears...

Harlon was one of Papa Bear's picks. He wouldn't be the first player that Halas signed who was virtually unknown to the NFL world. They knew they could wait until the later rounds to draft him because "even though they knew very little about him, the other NFL teams knew even less." He was drafted in the 15th round of the 1954 draft. Listen to this quote, talking about how Hill didn't waste any time becoming a dominant force in the NFL:

In his rookie season, Hill caught 45 passes for 1124 yards and 12 touchdowns. Those are numbers Bears receivers have rarely achieved during 16-game seasons through much of their history. He had a sophomore slump in which he only caught 42 balls for 789 yards but still led the league in touchdown receptions with 9. Then the following season, 1956, he returned to form, catching 47 passes for 1128 yards and 11 scores as the Bears lost the NFL championship to the New York Giants. Earlier that season, Hill made perhaps the best catch in the history of football when he laid out for an Ed Brown bomb along the goal line.

Clip of the amazing catch against the Giants:

His trademarks were 9.7 speed and remarkably soft hands.  Sportswriters compared him, not

unfavorably, with the great Don Hutson.

Beginning in 1957, a series of injuries slowed Hill, including a severe ankle injury in 1958, causing his outstanding speed to become less of a threat to other teams (he had been known as the NFL's most feared deep receiver). Eventually, the Bears switched him from a wide receiver to a defensive back. However, his level of play deteriorated until the Bears traded him to the Steelers for a draft pick in 1961. Later, Hill would talk about how he let his success "go to his head" and that his drinking deteriorated his level of play. However, he still ranks second on the Bears' all-time receiving list with 226 catches for 4,616 yards (behind Johnny Morris). Also:

Harlon Hill still holds numerous receiving records for the Chicago Bears, including most 100-yard receiving games in a career with 19.  Other records include, most 100-yard games in a season (7), consecutive 100-yard games (3), most seasons with 1,000 yards receiving (2), most yards receiving in a game (214), and most touchdowns in a game (4). Hill ranks second all-time in career yards with 4,616, is second in average yards per reception (24.98), and career touchdowns (40).

Harlon had short stints with the Pittsburgh Steelers and Detroit Lions in 1962. However, Hill's career was cut short by an injury.

After leaving the NFL,Hill returned to his native Alabama where he received his Master's degree in Education from the University of North Alabama in 1969, and became a public school teacher and coach at Brooks High School. Eventually, he became the principal there. (How cool would it be as a kid to have a former, successful Bears player as your principal?)

In 1976, he was selected to be in the Alabama Sports Hall of Fame. In 1990, he was inducted into the University of North Alabama Athletic Hall of Fame; and was selected for the 50th Anniversary UNA Football Team in 1998.

Anyone heard of the Harlon Hill trophy? It's named after him. It is awarded every year to the college football player selected as the MVP in NCAA Division II football. It was first given to Jeff Bentrim (North Dakota State University) in 1986, and is currently being held by 2009 winner Joique Bell (Wayne State University.)

In 1957, Hill wrote Victory After the Game with Ronnie Thomas. In this book, he describes how, after leaving the NFL, he conquered his alcohol addiction successfully. Nowadays, Hill is retired from the Lauderdale County school system, but still resides in Alabama. He is 77 years old. 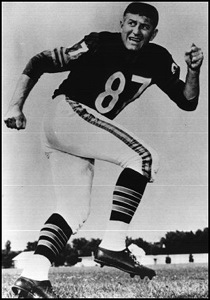 Here is a nifty timeline of Hill's achievements, etc. from 1930-2009 (including his trophy information). Want some more stats? Go here and here.