Taking a Look at Dave Toub

Share All sharing options for: Taking a Look at Dave Toub 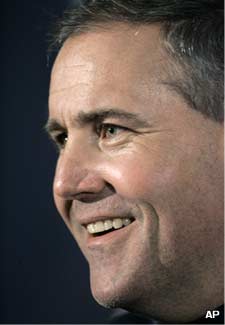 In part two (click here for part one) of this spotlight series looking at the Chicago Bears coaches and front office personnel, I was fortunate enough to draw Dave Toub.  This is the part of my opening paragraph where I go with the "Toub is arguably the most popular coach the Bears have employed since Mike Ditka"  line, but after giving it a second thought, there really is no argument.  Dave Toub is the most popular coach the Bears have had since Mike Ditka.  I can't recall ever hearing a negative thing about the man.

With the recent struggles of Chicago head coach Lovie Smith, many fans were calling for Toub to get the promotion and run the whole enchilada.  His Q Rating in Chicago is at an all time high, and I think him getting a head coaching job some day is a foregone conclusion.  Take the jump with me and let's get deeper into his résumé...

Popularity in Chicago isn't the only thing Toub has in common with Iron Mike.  Like Toub, Ditka has part of his coaching résumé spent coaching special teams: he was hired by Tom Landry to be the tight end/special teams coach for the Cowboys after his playing career ended.  Actually there are quite a few successful coaches that spent some time working in the 3rd phase.  Bill Cowher was special teams coach in Cleveland (1985-1986), Ken Wisenhunt also coached the Browns special teams (1999) and he was a ST coach at Vanderbilt for a couple years.  Marv Levy coached special teams early in his career in Philadelphia, in L.A. with the Rams, and in Washington.  And Bill Belichek spent time coaching special teams in Detroit, Denver, and with the Giants.

With the recent success of head coach John Harbaugh in Baltimore (Eagles special teams coach 1998-2006), it just opens more doors for a guy like Toub that has made his name coaching special teams.  Toub coached in Philadelphia with Harbaugh, and under head coach Andy Reid who had this to say of Toub (from the Sun Times):

"I have always said that on your staff the coach that is probably best prepared to be the head coach is your special teams coach because they have to deal with everyone on the roster plus you guys,'' Reid said. "And that's a tough thing to do. Very seldom does a special teams coach come out of a game and say, `Everything went well today.' It just doesn't happen. Normally, one phase somewhere, because you're dealing with so many different phases, wasn't as good as you wanted it to be.

"I think Dave Toub would be a great head coach down the road. I don't think he needs to switch anything. I think there are a lot of head coaches in this league that would be good head coaches."

Toub not only thrives in his position, he enjoys it.  The following is from an interview he did with USA Football magazine:

"I love what I do," Toub said. "I love coming to work. I don't see myself retiring young. I love it too much."

But coaching special teams isn't the only hands-on coaching he's done.  While in Philly he also assisted with the defensive line.  His first coaching gig was as a grad assistant at his alma mater Texas El Paso in 1986.  He then moved on to become their strength and conditioning coach for a couple years.  The University of Missouri came calling and he spent the next 12 years coaching the Tigers, 1989-1998, as their strength and conditioning coach and 1998-2000 as their defensive line coach.

He's been on board with Chicago since 2004, and he has one more year left on his deal keeping him at Halas Hall through 2010.  Like most Bears fans I'm hoping he's retained after next season, but also like most Bears fans, I'd like to see him get a head coaching job at some point in his career.  It's easy to root for a guy like Dave Toub to succeed.

Here's his bio from chicagobears.com
Here's the link to the USA Football article
And here's his Wiki page