In 10 short hours, the NFL will be in the full throes of Free Agency frenzy, with organizations trying to get their guy, agents on multiple phones talking to multiple guys, and players anxiously sweating whether this unique offseason will be their big payday.

As always, it's a little quiet, the calm before the storm. Unless you know where to look. We're keeping our eye out for tidbits and nuggets just for you guys and gals, the most dedicated fans in the history of the world. So let's see what's going on in the beariverse as we come up on, arguably, the single most important Free Agency period for anyone involved on this staff.

Alex Brown weighs in on the Peppers situation:

it's good to see he's taking it in stride. I think he realizes that the presence of a full-effort, healthy Peppers only increases his productivity.

Urlacher and Harris realize they're two big keys to this team's success:

"I think everybody pretty much understands ... I know that my job is on the line,'' Harris said as the Bears prepared for the start of free agency at 11:01 p.m. Thursday. "Everybody's job is on the line this year."We really don't have the choice of talking about what we're going to do and all that. We've just got to get it done or it's over. That's just how I feel for myself.''

Well said, sir. Now live up to those comments, and we'll talk.

Biggs makes mention of a possible Rolle landing with the Redskins, while Mike Sando of ESPN clarifies a little bit about Rolle's contract situation, exactly.

This article from stltoday.com explains a bit about what's going on with the possible low-ball offer to Atogwe, who's name has suddenly become much more popular based on this decision by the Rams.

If the Rams tendered him at the lowest level -- the fight of first refusal level -- the Rams could tender Atogwe at only $1,226,000, a savings of $5.75 million. League sources told the Post-Dispatch on Wednesday night that the Rams are considering tendering Atogwe at the $1,226,000 level.

The right of first refusal level is risky. It would give the Rams matching rights if Atogwe got an outside offer, but no draft pick compensation if they decided not to match. And Atogwe also could simply decide not to sign the tender, which would make him a free agent after June 1.

As it is right now, if they tender him at 3rd round or higher, they have to pay him 6.9 mil. So in summation, if someone offers him between 1.2 and 6.9, the Rams will likely just match it and retain him. If someone offers him more, the Rams will either pay more than they originally were trying to avoid, or they'll let him go with no compensation. Also, Atogwe could decide he doesn't like what the Rams are doing to him, and just not sign it. Then he'd be taking his chances and waiting until June 1st to be a free agent, also a risky decision. It's defintely an interesting situation going on there.

The Vikings have effectively named their tenders, according to Kevin Seifert of ESPN.

And finally, I took this screen shot of Julius Peppers' wikipedia entry this morning. (It no longer looks like this.) Make sure to note the "Career History" column. (click to embiggenate) 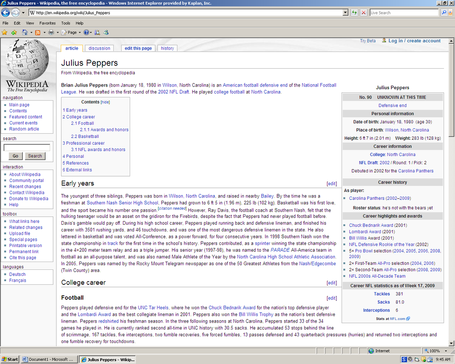 If you see anything else pop up out there this afternoon--throw it in these here comments. We'll add it to the Free Agency extravaganza this evening!