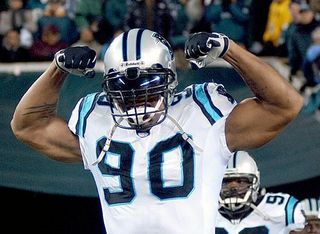 Buyer beware seems to be the notion swirling around the national media these days after the Chicago Bears forked over potentially $91.5 million to Julius Peppers. Why does wearing a Chicago Bears uniform seemingly cast a shadow around a players ability to perform in the pubic's eye? It happened to Cutler last year and now it's happening again. I find it hard to believe that these same allegations would arise had Peppers signed with a more media friendly team.

Only weeks ago were they describing Julius Peppers as a five-time Pro Bowl defensive end and the top free-agent prize. Suddenly he lands in Chicago and everyone wants to write him off. I can't be the only one who finds this a little ridicules.

The media as brought up two main pts:

The truth is, the Bears probably overspent for 30-year-old defensive end Julius Peppers, who will get a guaranteed $42 million in a six-year, $91.5 million deal.

I remember that same argument being made for Brian Dawkins when Denver signed him last year. That signing single handled changed the entire face for that defense. People forget that defensive players can play well into their 30's at a high level. The magic number 30 only applies to running backs. Ray Lewis also is well into his 30's and is still the anchor for the Baltimore Ravens. This is a non-issue and avoiding Peppers because of this logic is ludicrous. Not to mention the bears strategically hedged themselves in the Peppers contract if his play starts to deteriorate. It's a win-win for both sides.

For the full scoop on the logistics of the contract be sure to check out (Peppers Contract: Actually, Not That Bad! by smudgers)

Where in these numbers show inconsistency?

These numbers do however show he as consistently recorded almost double digit sacks his entire career. If that's him playing inconsistent, then he has yet to tap his full potential..... that's a scary thought. Under Rod Marinelli's guidance Peppers could have his best seasons to come.

" Rod Marinelli in league circles is probably regarding as the best defensive line coach in the game. The opportunity to come work with him was intriguing and that only made it better when I found out he got promoted. I wanted to go somewhere I felt I could grow as a player and I feel like that was possible with Rob Marinelli".

Remember Randy Moss in Oakland, I do believe everyone was saying he was inconsistent and took plays off too. Bill Belichick didn't think so, and the next year Randy Moss broke the record for receiving touchdowns. Patriots were reportedly in the mix for Peppers, making you wonder if one of the greatest minds in football saw that same potential in are newly acquired defensive end.

I don't want to hear anymore of this overpaid and inconsistent play mumbo jumbo from the media.

There's no doubt in my mind, Peppers is the right ingredient to bring the spice back into Chicago's defense.

The only question remaining is what nickname will catch on for Julius "Hot" Peppers next year in Chicago?

What will Julius Peppers nickname be in Chicago?